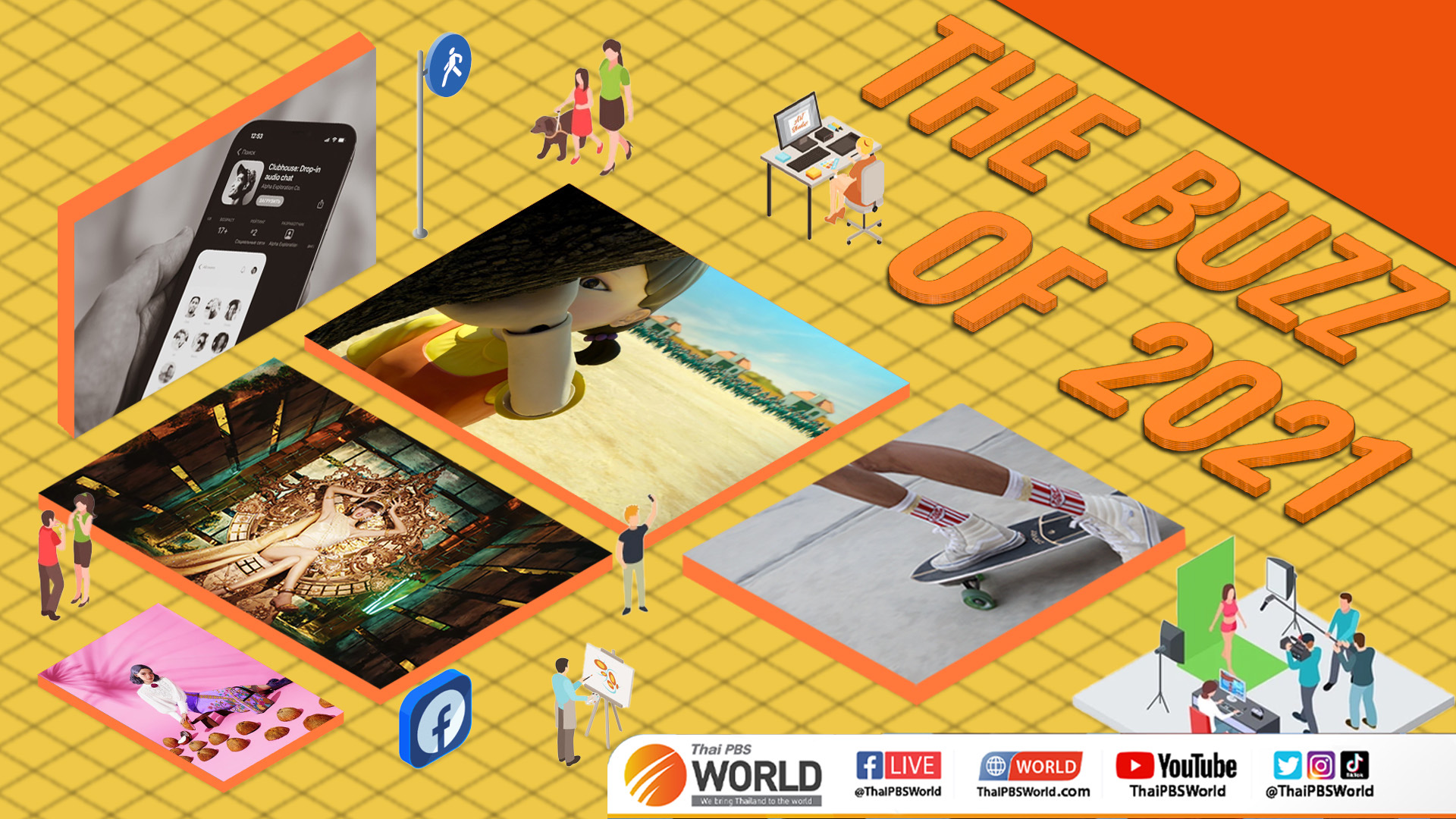 The BUZZ of the year is back, with more mesmerizing trends! 2021 has sparked a lot of new and interesting trends, some of which weren’t expected to become a craze among Thais. Let’s take a look back at some which made the year so interesting, apart from Russell Crowe’s candid review of Bangkok and the invasive nasal swab tests.

With its creepy killer doll, the pink soldiers, deadly children’s games and, of course, the Dalgona candy, this original Korean series was undeniably a global phenomenon. Apart from being crowned the most-streamed series of all time on Netflix, all the leading actors were propelled to ultimate fame.

The extreme popularity aside, the horrifying scenes caused huge concern, with schools banning their students from watching it, to prevent them from copying violent scenes in their playgrounds. Not only that, students were also banned from wearing Halloween costumes that resemble Squid Game characters. Last year we said that TikTok would still be the “it” platform in 2021, but Clubhouse became another rising social media phenomenon, thanks to Tesla CEO’s Elon Musk. Clubhouse allows users to create online discussions with numerous people, with chances of talking to well-known public figures.

The popularity, however, was short-lived in Thailand, with many celebrities saying goodbye to the platform as they think it’s a waste of precious time, which they could use it to do something much more productive. Not only that, reports of blatant discrimination and sexually inappropriate remarks within discussions have already sparked the #ClubhouseToxic hashtag on Twitter.

VERDICT: Unless you’re doing educational or informative seminars, Clubhouse can be extremely toxic and energy-draining. Use it wisely. Invented by surfers who wanted to “surf” on land, surf-skating became a huge trend in Thailand. An increasing number of malls and public spaces providing ramps has also helped the sport grow in popularity. Surf-skating can be a great way to spend time with your friends and family, without having to involve a crowd. Did you know that skateboarding actually became an official sport at the Summer Olympic Games in Tokyo?

VERDICT: A great way to spend time outdoors and it’s a sport, not just child’s play!

As many hairdressers were closed, due to lockdown restrictions, people were itching to cut their own hair, during which the so-called “Yoo Na Bi” haircut became another craze on TikTok. Inspired by Han So Hee’s role in the “Nevertheless” K-drama, many fans were marveling over her flawless beauty, including her haircut. A number of TikTokers have showcased their attempts to create bangs and front layers of their own, hoping to switch up their looks and to exude the same beauty as the rising Korean star.

VERDICT: Interesting, but should never be done impetuously just because it was the trend.

The love for LALISA

Our BUZZ article would be incomplete without mentioning Thai K-pop sensation, Lalisa “Lisa” Manoban. Since the release of her debut solo mini-album “LALISA”, the traditional headdress she wore in the promotional video suddenly became a hot item. Not only that, local meatballs in Lisa’s hometown of Buri Ram were also selling like hot cakes, thanks to her TV interview with host Woody, in which she said they are the first thing she wants to eat when she gets to visit her home.

VERDICT: Thanks to Lisa, elements of Thai culture are finally having an impact on a global scale. Let’s keep the momentum going! Thanks to this year’s Miss Universe Thailand, Anchilee Scott-Kemmis, Thais are FINALLY becoming more aware of body positivity and body diversity. Although such topics have been discussed before, it was not until her game-changing victory that more light was shed on this. Many celebrities and non-celebrities have also been joining Anchilee’s #RealSizeBeauty movement, to show pride in their own bodies. We also have to mention Silvy’s XL song, which encourages women to love their own curves.

VERDICT: #RealSizeBeauty is a great start in creating awareness of body positivity, but more positive representations are desperately needed in the media. Thai Buddhism with a twist

If you think Buddhist teachings can’t be fun, you could be wrong. Two famous (now former) monks Phra Maha Praiwan and Phra Maha Sompong became overnight sensation, after their Facebook Live session gained an overwhelming response from users. With their sense of humour and the use of trendy teen slang, the livestream attracted more than 200,000 users.

VERDICT: Modernising Buddhism is the only way to reach the younger generation… No drama needed! As everyone is talking about the “Metaverse”, Thailand has introduced a number of virtual influencers here and there. From Ailynn, Bangkok Naughty Boo to Katii, which possess unique characteristics, these virtual models are meant to shake the digital advertising industry to a whole new level. They are almost like human influencers, who you’ve been following on social media, showcasing their own lifestyles on their Instagram accounts, involved in product endorsements and appearing in magazine shoots and covers.

VERDICT: Well, it is the future, but we hope we don’t lose all the talented human beings in the industry. When you’re just plain bored, you may have turned to PopCat. Back in August, Thailand managed to top the leaderboard of this surprisingly popular online game, where players gain points by simply tapping or clicking on the cat to make its mouth open-wide with a popping sound. It is more proof that Thais are seriously united, even for very simple online games!

VERDICT: Unless you seriously have nothing else to do, it’s a great way to pass the time mindlessly. By the way, did you know that the cat’s name is Oatmeal?