No one can take your rights away from you – Chumaporn Taengkliang

“The truth is, not every place has been friendly to people like us, because they think we’re going to cause chaos. What we really want is to demand our rights, which of course, we have to do in public places.”

Chumaporn Taengkliang, a prominent activist on feminism and LGBT issues, reveals the struggles, including the problems with which women and non-binary genders have to deal, because some people do not understand their social movement.

While many other developed countries have already legalised same-sex marriage, Thailand is still in the fight for equal rights for all genders. Currently, neither the draft marriage equality nor the draft civil partnership bills have passed their first readings in parliament.

Whether the whole society is to blame or not, many activists like Chumaporn believe that the patriarchal system is the root cause of mistreatment and prejudice against women and other genders.

Chumaporn, also known as Waaddao, has always been at the forefront in demanding justice and equality for women and non-binary genders. Being an activist on gender issues, however, also involves numerous struggles.

We interviewed Chumaporn on a rainy Valentine’s day, when her alliance of LGBT activists held a demonstration in support of same-sex marriage in front of CAT Telecom building, the same location where marriage registrations for heterosexual couples were being held.

We got a glimpse of the struggles these activists had to go through. When Chumaporn was about to finish her answer to our first question, we were suddenly asked to leave the building.

“Now you can see the obstacles we have to go through,” she told us, after we moved outside to continue our interview, which reinforced her claim that their demonstrations are barely tolerated or welcomed by others. “We’re not here only because we want to protest,” she said. 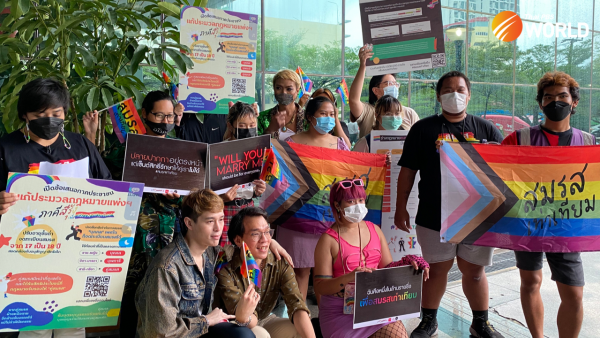 Since the pro-democracy protests began in 2020, Chumaporn and her alliance of activists have been demonstrating on the streets to push for change. Unfortunately, many of the protesters, particularly those who have been upfront in provoking changes to the Thai establishment, became prime targets for authorities.

In the course of two years, Chumaporn said that up to 80 charges have been filed against feminism and LGBT activists, while Chumaporn herself was the subject of 10. The charges were mostly for violating the state of emergency decree, which many protesters and human rights groups believe that it restrict people’s rights to freedom of expression and public assembly.

Aside from the charges, she feels that both female and LGBT activists are never treated the same as male protesters, whether it’s on stage or on the streets. Even worse, they also become targets of sexual harassment, inappropriate teasing and oppression during political demonstrations. She gave examples where one of the female activists was groped on the breasts, only because she was making a no-bra protest, while another was followed and hit upon by a policeman.

“This is what we had to go through, but we couldn’t do anything, because when we filed a report with the police, we would be victimised again.”

Chumaporn’s movement was also questioned by certain political groups, who opposed their demands for gender equality. She recalled when they held a demonstration at Ratchaprasong intersection last year, when a group of ultra-royalists blamed their protests for degrading the LGBT community.

“Many people said that we should fight for democracy first, then we can fight for gender diversity, but we don’t believe that our society can move forward with only one issue. This is the strength of our democracy and everywhere around the world is like this. How can you deny this reality?”

“Whether it’s the law, society, culture, traditions or acceptance, the patriarchy oppresses us everywhere.”

Her activism has been widely recognised and, in fact, Chumaporn has been advocating for gender equality and same-sex marriage for more than nine years.

Her drive to provoke change comes from her own struggles when she was younger, when she could not tell her friends or her family about her non-binary partner, and when she was surrounded by people who were victims of sexual violence.

“I felt chained up, because I couldn’t be myself,” she said.

Chumaporn has questioned the unfairness around her since she was young. She perceived thatthe patriarchy is ingrained in all parts of society, from the depiction of rape in Thai soap operas, news of sexual harassment in schools, or even the lack of female representation in parliament or in court.

She then began her activism with her friends, under the name “Togetherness for Equality and Action – TEA”, or simply “Rong Namcha” in Thai. The name came from her upbringing in the south of Thailand, where women and children were barred from entering local teahouses, which were reserved for men to engage in political discussions.

“Women have always been barred from politics,” she said. “People look down on women for merely knowing or talking about politics, because they think it’s none of our business.”

Her advocacy for gender equality has evolved into a large network of activists, known as the Rainbow Alliance for Marriage Equality, which includes many other feminist and LGBT groups which hold similar beliefs. Their key mission is not only to demand equal rights for all genders, but to break the patriarchal system in Thai society which, they claim, has been oppressing them for too long.

Despite the immense obstacles involved in their activism, Chumaporn still hopes that same-sex marriage can be legalised soon, as more people become more open-minded to justice and gender diversity.

“Initially, we thought we would have to fight for same-sex marriage for another 10 years, but I think this is shortened now. I think we will be able to see it in the next one or two years.”

Chumaporn gave huge credit to the younger generation, who have stood up to provoke changes for equal rights for women and the LGBT community which, she says, has had a huge impact on society. Without them, such issues would still be ignored.

“We’ve seen younger people holding up signs with messages that we’ve been advocating for our entire lives, namely safe abortion availability, marriage equality and the legalisation of sex work,” she said.

Chumaporn feels that technology and social media have enabled young adults to advocate for issues, from uploading their own digital illustrations to the use of related hashtags along with their tweets. Unlike other NGOs, who take a long time to approve budgets in order to organise an advocacy campaign.

“This is a new phenomenon in our society,” she said. “We could end up with the same cycle of problems if we don’t speak up for gender equality and break the patriarchal system while fighting for democracy.”

Apart from the social movement, what Chumaporn really wants to see is changes to the constitution, to make it more inclusive for all genders. She suggested that the Thai constitution should have a gender quota, to increase female representation in the legislature, in order to ensure equality for the people, as well as using gender-neutral terms in the law and giving more emphasis to gender responsive budgeting.

Most importantly, Chumaporn also wants to see local communities being properly educated about gender equality, which would help eliminate domestic and sexual violence.

“We need to educate people on gender and gender equality in all local communities. This would be a real change because, if sexual violence within a family occurs, their community will come out and help each other as they would know straight away that this is not right.”

Being an inspiration for others

As a core member of the Feminist Liberation group and the Rainbow Alliance for Marriage Equality, Chumaporn’s strong advocacy has inspired many young women and members of LGBT communities, including fellow activists, to come out and demand their rights.

One of them is Siri “Tata” Ninlapruek, an LGBT activist who praises Chumaporn for her enthusiasm for making progressive changes, particularly in demanding marriage equality. This makes him feel at ease in coming up with creative ways to campaign for equal rights.

“Many people within this community know how strong and brave she is. She’s not afraid to be her true self, to say what she wants and what she thinks.”

Similarly, another female activist, Sudarat Boonprasert also feels that Chumaporn has inspired her in many ways, particularly the way she empowers people to share their ideas, their problems and possible solutions.

“She gave us an open opportunity to express and contribute to changes freely. I think what she did has been an inspiration for me.”

No one can take your rights away from you

As to what she would like to say to those who want to make changes in society, Chumaporn took this opportunity to praise the younger generation for speaking out on certain issues, which has pushed back boundaries in society.

At the same time, she would also like to encourage women and people of the LGBT communities, who are still suffering patriarchal oppression, whether it’s sexual harassment or discrimination.

“Nobody can take our rights away from us,” she said. “I would also like to tell them that we’re still fighting, so that there will be fewer people suffering from this oppression.”

With the ongoing momentum of the new generation, whether it’s for gender equality, women’s rights or same-sex marriage, she hopes to see progressive changes in all parts of Thai society.

“Today, we’re not only seeing a few people involved social movements anymore, but there will be millions of people coming out to make this society more equal and fair to all of us.” 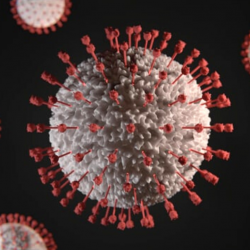 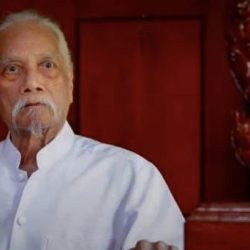