Those attending the event were invited to sign up in support for their attempt to amend Section 1448 of the Civil and Commercial Code regarding marriage, which states that a marriage is between a man and a woman who are at least 17 years old.

The groups, in particular LGBTQ+, are demanding legalisation for and recognition of same-sex marriage, after the Constitutional Court ruled that stating that marriage is between a man and a woman is not unconstitutional. The court also suggested, however, that relevant agencies amend the law to provide equal marriage rights for all genders.

Move Forward party-list MP Natheepat Kulasethasit said they attach importance to the LGBT community’s call for equality and have tried to push for amendments to the law through the House committee, but failed due to insufficient support.

Udomsak Srisuthiva, deputy secretary-general of Chart Thai Pattana, said they would like to hear views from the groups, to be complied with those of the party’s strategy and policy committee, for submission to parliament.

Chumaporn Taengkliang, of the Feminist Liberation group, representing the Common People Party, told attendees that they should vote for new parties like hers if the bigger parties ignore the call for equal rights for all genders.

During the event today, the groups laid out a huge rainbow flag, which symbolises the LGBTQ+ community, on the road in front of Central World shopping mall. Traffic was congested but not blocked, as the rally occupied only one lane of the road with police being deployed to direct traffic and maintain order.

No untoward incidents were reported. 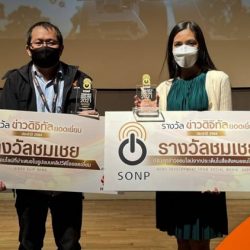 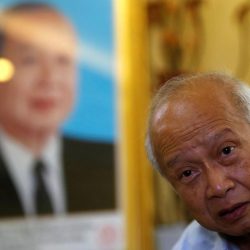