Thai opposition Move Forward party’s draft bill on same-sex marriage was dealt a blow today (Wednesday) when the House of Representatives voted to send it for vetting by the cabinet before its first reading in the House.

On the same day, the progress of the opposition party’s liquor bill, intended to open up Thailand’s liquor industry to more competition, was also delayed by the House when it voted to send the bill to the cabinet for consideration in 60 days, apparently a new stalling tactic that has sent a Thai-language hashtag “marriage equality” trending on Twitter as netizens voiced their disappointment and outrage.

PM Office Minister Anucha Nakasai told the House that he was assigned by the cabinet to accept the marriage equality bill for consideration by the cabinet before its first reading.

The move to delay the bill by the cabinet prompted a protest from Julapun Amornvivat, a Pheu Thai MP representing Chiang Mai, claiming that the cabinet’s vetting process will cause the first reading of the bill to be delayed by 3-4 months.

During the debate on the same bill today, Move Forward party-list MP Tunyawaj Kamolwongwat broke into tears, prompting House Speaker Chuan Leekpai to urge him to stop weeping and other MPs to offer him moral support.

“To call for marriage equality is not a call to have more rights than others, but the LGBTQ+ community is trying to tell those in power that they have deprived us of our right to a family,” Tunyawaj said during the parliamentary debate.

The Move Forward Party’s draft bill on marriage equality is similar in details to the draft bill submitted by civil society, which seeks to enhance rights of the LGBTQ+ persons to the higher level than the “civil partnership” draft bill, which has not yet been passed in Parliament. 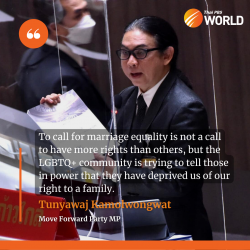