Newly elected Bangkok Governor Chadchart Sittipunt has injected new energy into the capital with his distinctive work style. In stark contrast to his predecessors, Chadchart is down-to-earth, highly active, and open-minded.

“I am not your boss,” Chadchart told officials of the Bangkok Metropolitan Administration (BMA) at their first meeting. “We will work together. No matter what you have in mind, you can talk about it with me. If you think I should revise policies or add some more policies, come forward.”

Chadchart has been dubbed the “world’s strongest politician” for his impressive physical build and has dispensed with the entourage of bodyguards that accompany many other public figures. This means that residents can easily approach him as he moves around the city.

Though known for waking and getting to work early, Chadchart has not ordered his BMA officials to do the same. He only wants them to focus on their work and address Bangkokians’ grievances.

“When problems are reported, relevant district offices should take action. Don’t wait till I pop up at your office,” said the new Bangkok governor during an inspection of problematic apartment blocks in Lak Si district.

Chadchart promotes the Traffy Fondue application as part of his policy to engage citizens in making Bangkok a more liveable city. Bangkokians use the app to file complaints about everyday problems – including trash, accessibility and uneven pavements – which are then addressed by the relevant agencies. The app already has tens of thousands of users, with many praising the quick response from agencies involved.

Before taking a break this week to attend his son’s graduation ceremony overseas, Chadchart was busy with at least six separate engagements per day during his first week in office.

On Environment Day (June 5), for example, he started the day collecting trash in the Chao Phraya River by kayak. He then led his team to pay respects to the Supreme Patriarch, cardinals, and Sheikul Islam. Later in the day, he inspected a housing estate and construction at Ranong intersection before attending the Bangkok Pride parade on Silom Road. In the evening, he rounded off his day’s duties by singing and dancing at a music-in-the-garden event in Lumpini Park.

Among them is Noi, who revealed that she had been a follower of Chadchart’s page even before he became Bangkok governor. Like many of his other hardcore fans, she checks his page first thing each morning.

“I now follow his work closely. And because of my keen interest in what he is doing, I have become interested in the way BMA and its officials work too,” she said.

Although critics claim Chadchart overpromotes himself via social media, Noi appreciates his efforts to stay in touch with the public.

Chadchart explains: “I use social media so Bangkokians can see how BMA officials work and where they can contribute to problem-solving.”

Political observers believe Chadchart’s savvy social-media outreach will help him to retain his popularity in the city following his landslide election win.

Also notable are the energy and strong work ethics that Chadchart brings to the job. And that extends even to the weekends, when most of us want time to ourselves. The new governor’s plan is to work on official duties from Monday to Friday and then use Saturday and Sunday to check Bangkok construction projects perceived to be moving too slowly. As a former engineering academic with a master’s from Massachusetts Institute of Technology (MIT) and a doctorate also taken in the US, Chadchart is well-qualified to solve infrastructure problems.

“Bangkokians face problems every day. So, I don’t think I should be taking a break on weekends. By not working on Saturdays and Sundays, I would lose two days of work from my schedule each week,” he said.

Over 17,000 complaints about Bangkok filed via new platform in first 11 days

Added to his impressive qualifications and high profile is Chadchart’s character, which makes it difficult for Bangkokians to dislike him.

The new governor is friendly, calm, open-minded and down-to-earth. In a refreshing change from other senior officials, he has made it clear that he does not want to see posters and banners welcoming him when he visits any place. He also does not think officials should accompany or greet him on visits.

When heavy downpours hit Bangkok recently, Chadchart was quick to visit the BMA Drainage and Sewerage Department even at a late hour. The sight of him working at 10pm immediately boosted Bangkokians’ confidence in their new governor. Clearly, Chadchart is dedicated to his job and is determined to deliver. And for BMA officials, his emphasis on solidarity and collective leadership must be reassuring in times of crisis.

At meetings, Chadchart declines to sit at the head of the table. If his chair is placed there, he encourages others to sit beside him to promote a collaborative mood. He is also keen to introduce his team members and listen as others are introduced.

Meanwhile, his words are polite, concise, and easy to understand. His reactions and responses also show a quick-wittedness, respect for others, and readiness to listen.

Chadchart has pushed for the deployment of prisoners to clean Bangkok’s canals and drainage ditches, but has also taken on board advice that soldiers could help with the task.

“Thank you for mentioning this. I will follow the advice,” the Bangkok governor said in remarks to address flood defenses.

The new city chief has shown no signs of anger despite being hit by personal criticism and complaints about the many problems that BMA has yet to solve.

When the chief of the BMA Drainage and Sewerage Department was slammed for saying his agency had only dredged two canals ahead of the rainy season recently, Chadchart apologized and took the blame himself.

“I popped up late at night and he did not have time to prepare the information,” said the governor. “Besides, what he said was correct. It’s just that he did not explain that canal dredging falls under the jurisdiction of various other authorities too,” Chadchart said.

Meanwhile, when a famous TV host openly mentioned Chadchart in his plea for action to solve Bangkok’s notorious traffic jams, the governor responded: “Thank you for sharing your thoughts … If you want me to address any issue, tell me. I will do it.”

Chadchart, who ran as an independent in the governor election, has also made efforts to ensure there is no bad blood between him and Prime Minister Prayut Chan-o-cha after the public began making harsh comparisons between the two men.

With his character and attitude, Chadchart has the potential to transform Bangkok and citizens’ engagement in city affairs. However, only time will tell if he can capitalize on this potential. 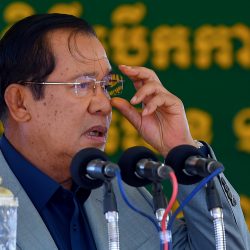