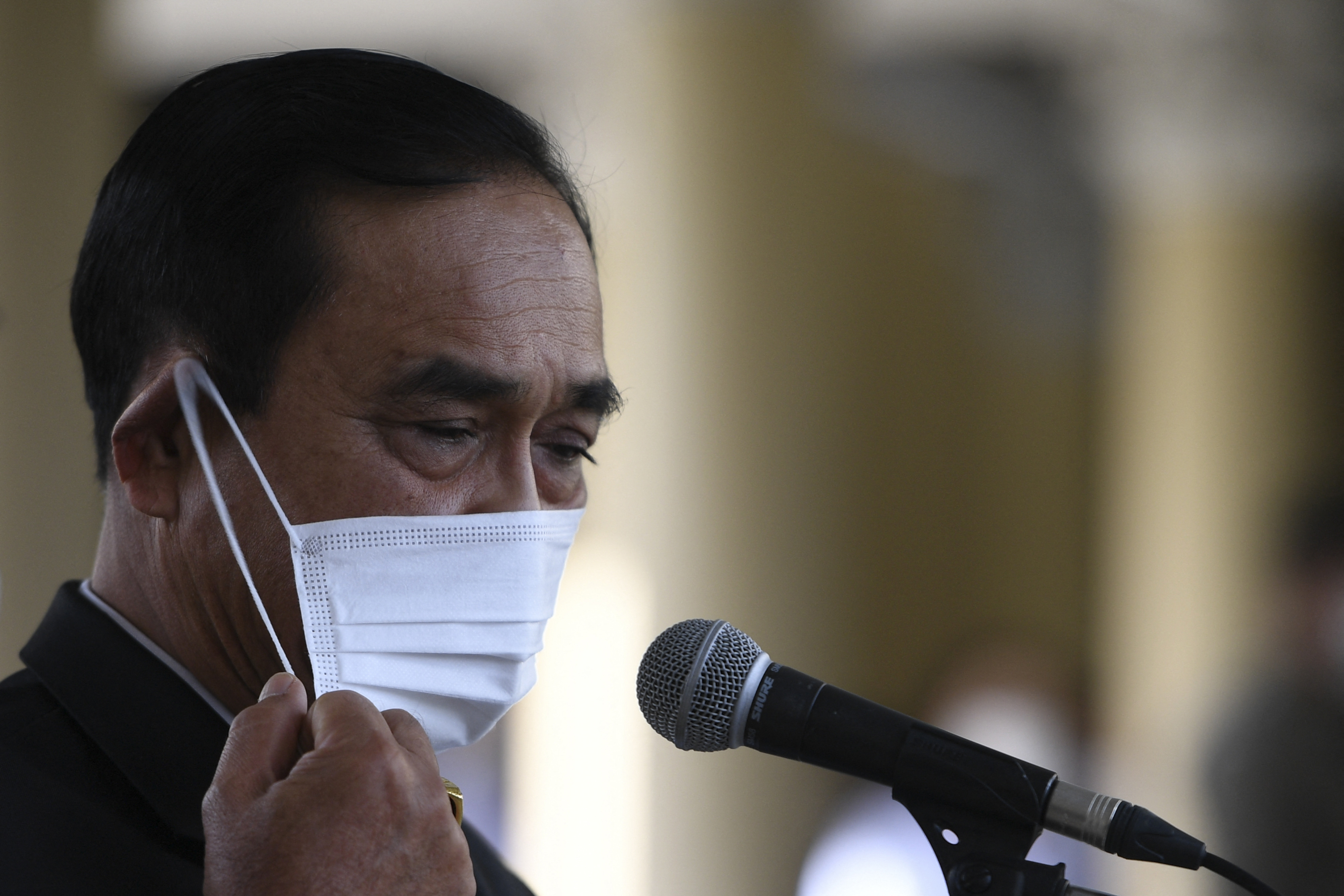 Prime Minister Prayut Chan-o-cha and his government are suffering a barrage of attacks from critics and political rivals as Thailand is hit by a third wave of COVID-19 infections.

Some observers are warning of a popular uprising if the government fails to tackle this fresh outbreak successfully.

The attacks came after the number of daily infections rose past 2,000 over the past week, up from less than 100 before the fresh outbreak. Saturday alone saw a record 2,839 infections with deaths from COVID-19 hitting an alarming number of eight on Saturday and 11 on Sunday.

Opposition politicians and critics have blamed the soaring infections on the government’s mismanagement and its refusal to impose a national lockdown over concern for the economy.

They are also complaining of a shortage of vaccines, slow rollout and insufficient medical facilities, especially hospital beds, amid growing calls for more government aid for those affected by COVID-19.

With COVID-19 cases now rising by more than 1,000 per day, many Thais are wondering whether the country’s healthcare sector will crumble under the pressure. Despite the launch of field hospitals and “hospitels” (hotels turned into hospitals) concern is rising that the limited medical workforce may soon be overburdened.

Some academics have warned that the growing public discontent could land the government in hot water. Even its supporters could turn against the government over claims it is doing little to ensure public safety and ease economic hardships caused by the outbreak.

“People who feel insecure about their health or face financial crisis [due to the contagion] could ally with the anti-government movement even though they do not share its ideology,” said Yuthaporn Issarachai, a political scientist from Sukhothai Thammathirat Open University.

Authorities blame the infection surge on people travelling upcountry during the Songkran festival in mid-April, though the government has confidently declared the situation would ease two weeks after the long holiday.

“If infections keep rising and the shortage in [hospital] beds continues, we are likely to see a popular rising,” Yuthaporn warned.

“Imagine if more infected patients are forced to stay at home because there are no beds in the hospital, others in the community may very well besiege hospitals to show their anger,” he said.

April 25, 2021 The director of the Thoracic Society of Thailand, under Royal Patronage, Dr.Nitipat Jiarakul, has taken CCSA to task over the claim that there are sufficient hospital beds to meet the demand represented by increasing COVID-19 infections. He also called on CCSA to provide accurate facts about hospital beds, vis-à-vis the actual capacity of medical services in Thailand.

Wanwichit Boonprong, a political scientist at Rangsit University, reckons the government may struggle to survive until the scheduled mass inoculation drive kicks off in July.

Though the government insists it is rushing to acquire more COVID-19 vaccines, critics say long-winded procurement regulations are making the process far too slow.

In his televised address on Friday, General Prayut said his administration aims to acquire 100 million doses to inoculate 50 million of Thailand’s 70-million population this year.

He added that his government has succeeded in securing the purchase of 5-10 million Sputnik V vaccines from Russia and an equal number from US pharmaceutical corporation Pfizer. However, he did not say when these vaccines would be delivered.

The government had earlier announced plans to inject 2 million doses of Chinese-made Sinovac in frontline medical workers and vulnerable people by May.

Then in June to December, the plan is to administer 10 million jabs per month to the general population, once domestic production of 61 million AstraZeneca vaccine doses starts up.

April 25, 2021 A group of Thai medical professionals has issued a statement, asking the country’s prime minster to reconsider locking down the country again as a matter of urgency, citing the rapid spread of the latest wave of COVID-19 infections and fears that the medical system will collapse.

The worsening COVID-19 situation has armed Prayut’s political rivals with fresh ammunition. But with fear of infection keeping the anti-government movement off the streets, the opposition has decided to launch its attacks online.

The United People for Thailand, led by red-shirt leader Jatuporn Prompan, has vowed to deliver speeches online every weekend until the COVID-19 situation eases, before launching street protests. The group’s leaders on Sunday (April 25) called on Prayut to resign and make way for a “capable person” to run the government.

Former prime minister Thaksin Shinawatra also slammed the government, accusing it of hurting the economy with its botched crisis management. He said Thailand should change its tactics and follow the United Arab Emirates’ example for tackling the outbreak.

“Prayut has been a military officer all his life. He’s familiar with the top-down chain of command and with spending state funds. He’s not good at economics,” Thaksin said.

The fugitive former PM, who lives in self-imposed exile in Dubai, praised the Middle-Eastern state for successfully dealing with COVID-19.

Thaksin joined an April 20 discussion on the Clubhouse social-media app hosted by his allies under the CARE group. Using the handle “Tony Woodsome”, Thaksin said the Thai government should invest more in vaccines and buy from all major makers, just like Dubai has done.

He also urged the government to allow the private sector to import vaccines freely, as mass inoculations will help speed up economic recovery. He said Thai tycoons with strong international ties should be asked to negotiate vaccine procurement.

He also offered to speak directly to Russian President Vladimir Putin to help with the purchase of Sputnik V vaccines.

Prime Minister Prayut Chan-o-cha has assured the Thai people that he and his government will explore all means to get Thailand through the current crisis, posed by the third wave of the COVID-19 pandemic. He also appealed to people to join his government in the fight against the disease, saying he has confidence in the capacity of people to overcome this crisis.

Calls for Prayut to resign

Meanwhile, former PM candidate Thanathorn Juangroongruangkit is calling on Prayut to step down and make way for a new head of government who can complete two missions – combat COVID-19 effectively and amend the Constitution.

“This way, we can deal with COVID-19 and political problems at the same time,” he said in a Clubhouse discussion on April 23.

He also said this was the time for Thailand to inject massive amounts of money, probably Bt1-2 trillion, into the domestic economy to create jobs and ease social problems, sacrificing financial discipline just as the United States has done.

Wanwichit, of Rangsit University, said both Thaksin and Thanathorn had better and smarter strategies than the government for dealing with the virus and the economic crisis simultaneously.

“The government began losing face when Prayut instructed the Foreign Ministry to try and procure Sputnik V vaccines. People think he may have followed Thaksin’s advice,” he said.

Some opposition parties believe Prayut may dissolve the House in a bid to ease his current headache. Wanwichit, however, warned this may be a risky choice since the ruling camp could end up losing the next election.

“I think the voters will teach government MPs a lesson by supporting opposition parties, especially Pheu Thai and Kao Klai,” he said. 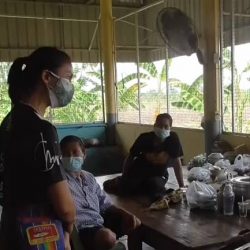 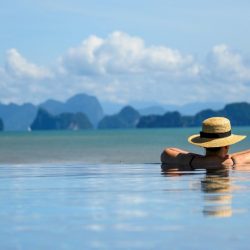 Will Thailand's new COVID surge kill a plan to restart tourism in July?