The Bangkok South Criminal Court has rejected an application from a Thai student, currently facing a lèse majesté charge, seeking to be allowed to pursue her post-graduate studies in Germany under a scholarship program.

According to Krisadang Nutcharat, a lawyer at Thai Lawyers for Human Rights (TLHR), the decision is the second against Ravisara Eksgool, aka “Dear”, a graduate student of the Faculty of Arts at Chulalongkorn University. She has been awarded a scholarship by the German Academic Exchange Service (DAAD), under the Helmut Schmidt program for postgraduate courses, to undertake Master of Management in Non-Profit Organizations, at the University of Applied Sciences and  a preparatory language course in Germany from April 4th, 2022 until August 31st, 2024.

Krisadang said that yesterday (Thursday) the Bangkok South Criminal Court issued an order rejecting Ravisara’s application, claiming that it could not be sure that she will be able to comply with the proposed conditions during her time in Germany and may try to evade a trial.

The court also reasoned that it would be difficult for her parents and guarantor to control her from Thailand while she is in Europe and that she had not officially won the scholarship yet, as she will need to pass the language requirement first.

In her second application for permission to leave the country, Ravisara pledged to report to the Thai embassy or consular office in Germany every 30 days and proposed that her parents and her lecturer at Chulalongkorn University, her guarantor, be responsible for supervising her, to make sure that she strictly complies with the proposed conditions.

The student was charged with lèse majesté for reading a statement, in German, during an anti-establishment protest in front of the embassy in Bangkok on October 26th, 2020.

A letter from German ambassador to Thailand Georg Schmidt dated February 18th and addressed to Ravisara congratulated her on being awarded the scholarship, saying “this is an achievement to be proud of – only promising and excellent university students quality for a long time scholarship.” 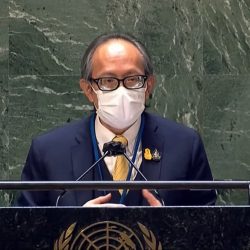 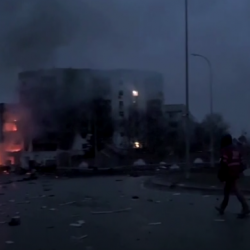