Songkran brings a splash of memories For anyone who has lived in Thailand for more than a year, Songkran time is unforgettable. The bright yellow flowers, called Golden Shower or ratchaphruek, burst into bloom weeks ahead, adding to the build-up to this vibrant festival.

If you are organized enough and plan well in advance, you would be at some scenic beach resort escaping the heat, but that was beyond me. Moreover, work that had to be done in advance to cover the long holiday period meant that many were at breaking point by the time the actual holidays arrived. Sitting in the traffic for hours would be the last thing anyone would want.

For Bangkok residents who stay in the city, one of the main things to look forward to is the lack of traffic as most Thais head to their hometowns. Zipping around the city is possible during the Songkran holidays giving you a chance to make a trip across town to catch up with some old mates.

Before Covid, the fun was avoiding getting splashed at every street corner as kids were waiting with buckets of water. Some would come and douse you with a generous helping of white powder too. It was very much like the Holi festival celebrated in northern India, though there the aim was to cover you with powder and water in psychedelic colors, turning you into look-alikes of characters in Avatar movie.

The Songkran festival coincides with the Vishu festival of Kerala which is a much more somber affair, with activities limited to temple visits and feasts to mark the beginning of a year as per the local lunar calendar, though Golden Shower flowers have the same prominence there too.

So for a Keralite living in Thailand, Songkran is like Vishu on steroids, welcoming a New Year with much more fun and plenty of frolics. The idea of getting water thrown at you by strangers could seem annoying to the uninitiated, but for those who live in Thailand, it is a brilliant way to celebrate.

The participation of the young and old with equal verve never ceased to amaze me. It was quite common to see entire families, including elderly people, pile on the back of pickup vans carrying huge drums of water go around throwing water at each other and passers-by.

The sheer fun of scoring a hit cut across all age groups and social levels: it was a time when everyone accepted others’ right to pour their happiness over you. Age, class, and status were irrelevant: sheer joy was the only thing that mattered. The local revelers also added their brand of cheekiness by greeting foreigners with a “happy new mia” wish and giggling away at those who failed to grasp the joke.

The majority of the foreigners who lived in Thailand jumped fully into the fun though a few would frown at the water throwers. Local people left such party poopers alone as there were enough people who understood the spirit and took part in the revelries.

The famous nightspots on the Sukhumvit and Silom areas and the backpackers’ haunt Khao San Road were heaving during the world-renowned “water festival”. People arrived with water guns of different sizes and shapes and pitched battles between water gun-toting groups would go on for hours. It was difficult to avoid getting caught in the crossfire, so you took it in the right spirit and downed gallons of beer.

Even if you didn’t, someone would make sure you got into the swing of things by sneaking up on you and giving you a good soaking, followed by another making sure your face gets a generous amount of talcum powder, bits of which you would find still stuck to your face the next day.

Even during tumultuous events that rocked the country in 2010, the fun and frolics during Songkran never stopped. I still remember walking in the Sanam Luang area a few days after a particularly violent confrontation, looking at the tell-tale bullet marks and broken windows. My friend and I walked along with those areas with heavy hearts and then reached the area where the road snakes around to Khao San Road, only to be greeted by people running around, shooting at each other with water guns. It was as unreal as it was heart-warming to see Thais who just couldn’t be held back from having fun during Songkran, come what may.

But such unbridled enthusiasm during Songkran has been laid low in the last two years as the Covid-19 pandemic scythed through societies across the world, both rich and poor. Khao San Road welcomed only a few foreigners throughout the two pandemic years, and Songkran splashing was muted if it happened at all.

The unrelenting economic hardships have taken a toll on everyone and hardly anyone can say they have remained unaffected by the pandemic. Songkran (New Year) in Thailand and similar festivals like Thingyan in Myanmar and the rest of Southeast Asia have been much less festive since the outbreak.

Every year Songkran brought with it wishes of good luck and hopes of prosperity ahead. As you learn more about the festival, you realize the traditional way of sprinkling water, showing respect to elders, and temple festivities were the core tenets. But in the typical Thai way, traditional and modern were blended by expanding Songkran into a “water festival” that brings cheer to every corner of the country and to all age groups.

Perhaps the new normal Songkran is not as festive as the pre-pandemic ones, but the spirit is there when we still greet each other with Happy Songkarn and Sawadee pi mai. And we all hope we will get our fun-filled festival back soon. 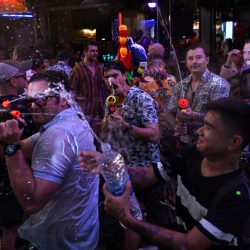 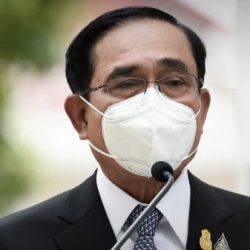