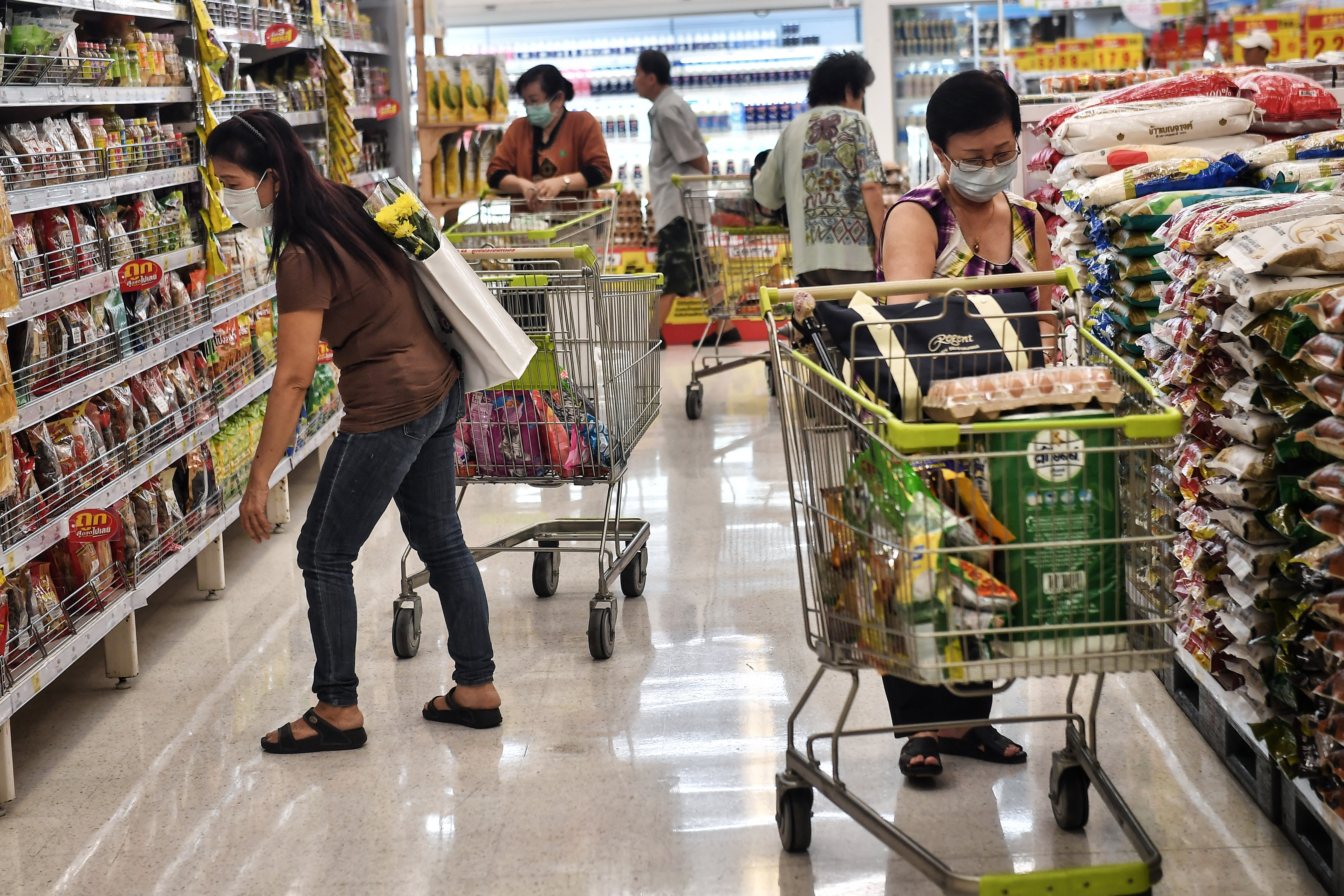 People, wearing facemasks amid fears about the spread of the COVID-19 novel coronavirus, shop in a supermarket in Bangkok on March 4, 2020. (Photo by Lillian SUWANRUMPHA / AFP)

The prices of many consumer products have been increasing, as the Thai Retailer Association warns that there is little prospect that they will come down in the next few months.

Meanwhile, Commerce Minister Jurin Laksanawisit told the Lower House, during the debate on budget bill, that his ministry is seeking cooperation from producers to maintain the prices of 18 categories of consumer goods.

He claimed that the price of rapid antigen test kits has dropped by about 30% and Thailand is among countries with a comparatively low rate of inflation.

Somchai Pornrattanacharoen, president of the Thai Retailer Association, forecast that prices of many products are likely to remain high in the next three months, due to increasing production costs caused by global price increases, the war in Ukraine and sanctions imposed by western countries on Russia.

He also warned that the prices of several more products are likely to go up soon, as he advised consumers to adjust to the difficult situation by being more cautious in their spending.

The Commerce Ministry reported that the prices of 18 categories of necessities have increased, such as pork and chicken, which have increased by an average of 19% compared to last year, bottled palm oil is 26% up from last year and a 12% rise for canned sardines.

A pork vendor told Thai PBS, in a random survey of food prices in markets yesterday (Thursday), that pork bones have become a popular item among shoppers, as the price is about 100 baht/kg.

The price of pork, however, increased four times last month to about 200 baht/kg, compared to between 140-160 baht/kg previously.

The vendor said that customers tend to buy more chicken and pork, which is cheaper than red meat.

A food vendor admitted that he rarely makes a profit these days because of the high costs of pork and other food items, as he blamed the government for its failure to control consumer product prices.

Zelensky says 'victory will be ours', on day 100 of Russian invasion