Yasothon authorities have erected red flags along the banks of the Chi River which runs through the province as a warning for residents to take precautions as the river has overflowed into low-lying areas and its tributaries.

Water in the river has continued to rise. The volume of water in the Yasothon Dam on Friday morning was 29 centemetres higher than yesterday.

Provincial authorities have been deployed to patrol along the banks of the Chi River to examine the strength of the embankments.

Aerial photos show the Chi River has overflowed into low-lying areas and its tributaries, prompting the authorities to have put up red flags along the river banks. 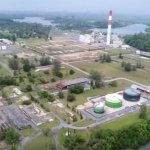 Panel to be set up to screen approaches to Wild Boars