The Royal Thai Police Office’s recent job opening for male-only inquiry officers is discriminatory and a violation against the Convention on the Elimination of All Forms of Discrimination Against Women of which Thailand is a signatory, said Mrs Angkhana Nilapaichit, a member of the National Human Rights Commission.

Mrs Angkhana urged the government and the Royal Thai Police Office to attach more importance to the role of female inquiry officers  and to increase the ratio of working women in government services. 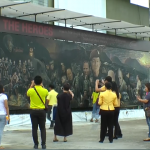