All 25 protesters, arrested near the Democracy Monument yesterday (Friday) as they tried to breach a police cordon to march to the Queen Sirikit National Convention Centre, have each been released on 20,000 baht bail.

23 protesters were released late last night and the remainder early this morning.

The protesters called off their rally at Lan Khon Mueang Town Square after they clashed with police as they tried to march to the convention centre to submit a petition to APEC leaders.

Arnon Nampa, a leader of the Ratsadon anti-establishment group, said that he will file a complaint with Samran Rat police today against the riot-control police involved in preventing the protesters leaving the town square, accusing them of resorting to violence to disperse the protesters. 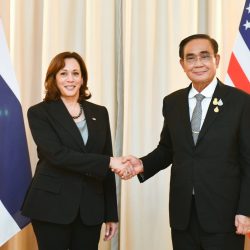 Thai PM pledges “heart-to-heart” cooperation with the US