PM thanks US for return of Ban Chiang artefacts

Prime Minister Prayut Chan-o-cha thanks the United State government for the return of 12 pre-historic artefacts of the Ban Chiang era to Thailand and all parties concerned for their hard work which made the recall bid a success, government spokesman Lt Gen Sansern Kaewkamnerd said on Saturday.

Lt Gen Sansern said Gen Prayut is full of praise for the Culture Ministry, the Foreign Ministry and other agencies for their role in bringing back the Ban Chiang artefacts to Thailand. The aretefacts were previously in the possession of an American woman.

The prime minister also thanked the US government for its understanding and providing convenience for the return of the artefacts, particularly the US ambassador to Thailand.

“The prime minister has stressed that the return of artefacts on this occasion should be recorded as an important historical event for further dissemination to the people, especially children and youth. The artefacts should be put on display for the Thai people to see so they can be proud of the value of Thai cultural heritages,” Lt Gen Sansern said.

The spokesman said the prime minister also conveys his moral support for officials who are working hard for the return of other artefacts including the lintel of Nong Hong temple ruin in Buri Ram province, the lintel of Khao Lon temple ruin in Sa Kaew province and many other ancient objects which are being displayed at US museums.

Prayut gets 6.40 out of 10 in latest satisfaction rating 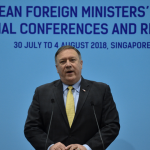