Prime Minister Prayut Chan-o-cha has offered a public apology for his miscommunication, which has caused widespread public confusion, over the 5,000 baht monthly cash subsidy for people affected by business closures.

He assured that the Government will try to help all affected groups by providing them with the cash over the next three months. He added, however, that, if the pandemic situation eases within that period, allowing people to return to work, the handouts might not be necessary.

“Please feel relieved,” said the Prime Minister today, as he maintained that he had no intention whatsoever to cause misunderstanding, adding that he merely wanted to explain to the people about how the Government secures funding.

At a news conference on Wednesday, he said that the Government could only afford the April payment of the 5,000 baht subsidy for about nine million people not covered by the social security scheme, freelancers, self-employed workers and small traders.  For the 11 million workers covered by the social security scheme, between 200-300 billion baht from Social Security Fund will be used to fund the subsidy and, for the 17 million people classified as farmers, the funding will come from a phased one trillion baht loan.

About the sources, from which the Government plans to secure the loan, Finance Minister Uttama Savanayana said that the matter is now being considered by the Public Debt Management Office, adding that the bulk of the loan will come from domestic sources, which could be financial institutions or through the issuance of government bonds, and that Thailand’s public debt ceiling has been kept at 60% of GDP.

The Prime Minister asked all members of the public to help reduce the number of new coronavirus infections to the extent that the situation improves enough that some of the restrictions can be eased.

The Prime Minister today visited frontline medical personnel at Siriraj Hospital to offer them moral support.  He also offered them an apology in case any of his unintentional remarks were deemed to be offensive. 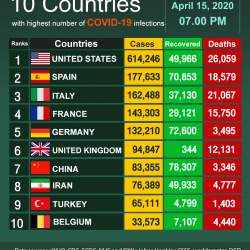 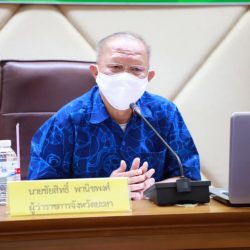