Thailand’s House of Representatives passed the first reading of the Move Forward party’s groundbreaking Marriage Equality Bill today (Wednesday), by 212 votes to 180 votes, with 12 abstentions and 4 no votes. The Bill, which, if it becomes law, will allow same-sex marriage.

A parliamentary committee has been set up to scrutinise the Bill over the next 15 days, before it is resubmitted for its second and final readings in the House of Representatives.

The Civil Partnership Bill proposed by the Government, will, however be used as the basis for the committee’s scrutiny, followed by the Marriage Equality Bill, raising fears of some moderation of sections of the final Bill.

In March, the cabinet rejected the Marriage Equality Bill, claiming that it was similar to the Civil Partnership Bill, which was approved by the cabinet last week.

Despite the cabinet’s decision, the Marriage Equality Bill was supposed to be debated and voted on last week, but that was deferred till today, prompting fears that it might not be accepted, especially if it is being compared to the government-drafted Civil Partnership Bill.

The Marriage Equality Bill seeks to grant the same rights, enjoyed by heterosexual married couples, to same sex couples, while the Civil Partnership Bill aims to grant a lot of rights, but still not all, and same sex unions would still not be regarded as marriages.

The Move Forward party’s Bill proposes that the terminology used in the current marriage law be changed to “spouse”, instead of “husband and “wife”, and “person” instead of “man” and “woman”.

A group of LGBTQ+ people and activists gathering outside the Parliament today cheered after the vote result is announced. Move Forward MP Tunyawaj Kamolwongwat, who drafted the bill, called the move “a victory of the people, not of any political party.” 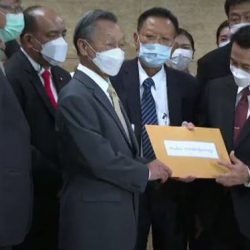