The Department of National Parks, Wildlife and Plant Conservation has set up a panel to consider the possibility of removing the red-whiskered, or crested bulbul from the country’s list of protected species, to accommodate eager breeders.

The panel will also consider streamlining regulations covering the breeding and trading of the birds, which are popular in several southern provinces for their beautiful song.

The department’s move follows Monday’s meeting of a special government committee, formed to address problems in southern provinces, chaired by Deputy Defence Minister Gen. Chaichan Changmongkol. During the meeting a representative of a group of crested bulbul breeders proposed their removal from protected species list.

After the meeting, Director of the Office of Wildlife Conservation Padet Laithongsaid that he has ordered a panel, comprised of wildlife officials and representatives of conservation groups, to be set up to study the issue which, he added, should consider aspects such as registration of the birds, breeding in captivity and trade in the birds.

Dismissing the issue as politically motivated to appease Southerners, Padet said that raising of crested bulbul is a traditional way of life for many households in the southern provinces.

Singing contests, with big rewards for the winning birds, were held regularly before the COVID-19 pandemic, attracting many enthusiastic spectators. The raising of the birds has also spawned a lucrative local business in the making of decorative wooden cages and a host of other decorative items.

Padet admitted that he isn’t sure whether the birds can be delisted, but certain regulations can be amended, in the short term, regarding the registration for permission to breed or to sell the birds.

For instance, he said that a breeder cannot sell or give away the chicks which he has bred, even though he has a license, because they are still regarded as a protected species.

The Seub Nakasathien Foundation and the Bird Conservation Society of Thailand have, however, voiced their strong opposition to the removal the birds from protected list.

The two organisations point out that the number of crested bulbul in the wild has been declining, due to hunting for commercial purposes, despite the fact that they are protected by law.

Citing bird census, taken by bird-watching groups, the number of crested bulbul in the wild has dropped by up to 90% in the past 20 years. 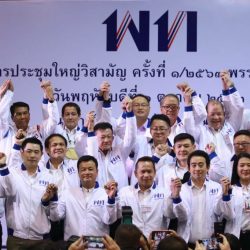