Palang Pracharat MP for Ratchaburi province, Ms. Pareena Kraikupt, will have to cede to the state the 102 hectares of land in Chom Bung district of Ratchaburi, which she has occupied and utilized for several years, because part of the land is in national forest reserves and the rest is classified as Sor Por Kor or land under the land reform program.

Deputy Agriculture Minister Thammanat Prompao said today that a sign has been erected on the land in question, part of which was developed into a poultry farm by Ms. Pareena, to prevent unauthorized people from entering.

He said he has instructed the Royal Forest Department and the Land Reform Office for Agriculture to work out how to make best use of the land, but he confirmed that Ms. Pareena is not qualified to rent the land because she is not landless or a farmer, despite paying local Por Bor Thor-5 taxes.

The deputy agriculture minister has made clear to the Land Reform Office that Sor Por Kor land occupied by people who are not landless farmers must be seized, even if they are government MPs.

Previously, the Ratchaburi MP had led a group of villagers to demand return to the state of a huge land plot, also in Chom Bung district, allegedly illegally occupied by the mother of Future Forward party leader Thanathorn Juangroongruangkit. 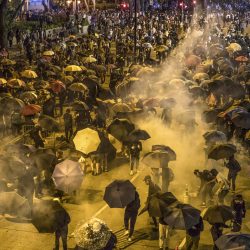 At Hong Kong university, a daring escape but fears of bloodshed