Thailand’s northern provinces of Chiang Mai and Chiang Rai may face a magnitude 5 earthquake, as measured on the Richter Scale (ML), in the next 10 years after a 4.1 ML tremor shook seven districts of the two provinces on Friday night, according to the Department of Mineral Resources.

The forecast is based on analysis of movements in the Mae Tha fault lines, including the 5.1 ML quake on December 13th 2006, the epicentre of which was under the Mae Rim district of Chiang Mai.

Geological studies of earth strata at Ban Pong Samakkhi, in Doi Saket district of Chiang Mai, indicate that the area experienced a 5.9 ML quake about 2,000 years ago.

The tremor on Friday night occurred at 9.46 pm, with its epicentre located about six kilometres below the surface of Doi Saked district.  The department said that it was caused by a right-lateral strike-slip in the Mae Tha fault line.

The tremor was felt by people in Muang, Prao, San Sai, Doi Saket and Hang Dong districts of Chiang Mai and Wiang Papao district of Chiang Rai.  However, there have been no reports of casualties or damage to property. 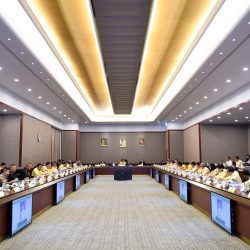