On the surface, the projection of messages by the Progressive Movement and the Move Forward Party (Kao Klai) were simple reminders of the May 2010 crackdown and the May 1992 pro-democracy uprising. But in reality, they have a clear political agenda.

Political analysts say the messages are part of a strategy to attract support and boost anti-government sentiment.

Bangkokians’ attention was caught on Sunday night when the words “finding the truth” were projected on buildings related to the 2010 red-shirt crackdown, exactly 10 years after the security operation which claimed nearly 100 lives.

At least six venues – the Defence Ministry’s headquarters, Democracy Monument, Wat Pathum Wanaram, the Skytrain near Ratchaprasong intersection, Central World and the walls of buildings in Soi Rangnam – were lit up by the projected message.

The following day, the Progressive Movement and the Kao Klai Party, both reincarnations of the now-defunct Future Forward Party, announced they were responsible for the campaign.

The stunt was a move to build their momentum and gain more allies, especially from the young generation, said Stithorn Thananithichot, a political scientist from King Prajadhipok’s Institute.

“They tried to link past events – May 2010 and Black May 1992 – to shed light on what happened for the new generation, many of whom may be too young to recognise the significance of these incidents. In fact, some will not have been born when the 1992 Black May took place,” Stithorn said.

Black May is the name given to the military crackdown on demonstrators protesting against the government of General Suchinda Kraprayoon in Bangkok on May 17-20, 1992. Up to 200,000 people took to the streets of the capital, and the crackdown resulted in 52 deaths and 3,500 arrests, according to official state figures.

Stithorn added that the Progressive Movement and Kao Klai want to remind the new generation of the controversial role the Thai military has played in the past, and point out that Prime Minister General Prayut Chan-o-cha and his top brass played a big hand in politics well before the 2014 coup that ousted Yingluck Shinawatra’s government.

Prayut, along with Deputy Prime Minister Prawit Wongsuwan and Interior Minister Anupong Paochinda, played a key role in the 2010 political crackdown under the Abhisit Vejjajiva government.

Prayut was deputy Army chief at that time, while Prawit was defence minister and deputy director of the Centre for the Resolution of Emergency Situation (CRES), and Anupong was Army chief and assistant director of CRES. The centre was set up in 2010 to deal with the red-shirt protest.

“The projected messages are actually targeting these individuals and the role of the Army in politics, not the Palang Pracharat-led government,” Stithorn said.

This campaign to “find the truth” about the crackdown could also attract support for the groups among hardcore red-shirts, he added.

Stithorn noted that red shirts who once marched against the Abhisit government under the United Front for Democracy against Dictatorship banner are now scattered, and their hardcore supporters need a new cause to rally around.

“The Progressive Movement would be a perfect choice for them,” he said.

The key to the attention-grabbing success of the projected messages was their novelty, said political observers. Though so-called guerrilla projections are not new in the worlds of art and advertising, they have never been used for a political purpose in Thailand before.

Images of the projections went viral on social-media the following day under the hashtag #ตามหาความจริง (#FindingTheTruth), which top-trended in Thailand for 24 hours with 1.2 million retweets. At that point, nobody knew who was behind the messages.

Despite warnings from the powers-that-be that the campaign was inappropriate at a time when the country is tackling Covid-19, the groups behind it insist that it is necessary.

“Everybody needs to know the truth. This move will help bring justice for all the victims and for the wrongdoers. If this can be achieved, there can finally be reconciliation in society,” Pannika Wanich, a member of the Progressive Movement, said.

She added that the projected messages were just a “trailer” to promote other activities to mark the two incidents, including film screenings, which will be held until May 20.

While noting that the projections represented a new form of political campaign in Thailand, critics added they had been timed for maximum impact amid the economic distress caused by the Covid-19 outbreak and the government’s sluggish disbursal of financial remedies.

Yuthaporn Issarachai, a political scientist from Sukhothai Thammathirat Open University, said politicians and activists had fallen quiet over the past three months, after the country was locked down to curb the contagion.

“So, these laser messages are perfectly timed to grab the attention of those who are struggling due to the government’s slow response,” the academic said.

He predicts the campaign is likely to trigger an upswell of anti-government sentiment if public frustration with the Prayut government grows, which could spark moves to oust the administration.

Yuthaporn is also convinced that Kao Klai will up the pressure on the ruling coalition by demanding to hear the truth about the crackdown once Parliament reconvenes next week.

“This will show the Progressive Movement’s ability to connect its moves outside Parliament to debates in Parliament through Future Forward’s reincarnation, Kao Klai,” he added.

He warned, however, that the government may brand the campaign as a threat to national security and use it as an excuse to extend the state of emergency, currently due to be lifted on May 31.

“Yet if the government does extend the law, it may fall into a trap, with public opinion turning against it over extended restrictions,” the academic said. 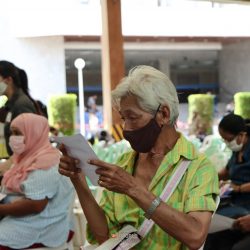 Trump says he doesn't want to talk to Xi right now, could even cut China ties