“Instead of amending the constitution, we should change people’s behaviour” – Senator Thawil

Senator Thawil Pliensri has suggested that instead of amending the constitution, we should change people’s behavior.

During the debate in Parliament today, the former National Security Council chief said he disagreed with amending the Constitution, given that about 16 billion baht of taxpayers’ money will have to be spent on holding three referenda, to approve the amended charter, at a time when many people are jobless and in financial trouble due to the fallout from the COVID-19 pandemic.

Pheu Thai MP Suthin Klangsaeng said, however, that amending Section 256, to pave way for the creation of Constitution Drafting Assembly to draft a new charter, is a way to solve the “bread and butter” problems of the people.

He also said that the 16 billion baht would be worth the expense because “with a good Constitution, Thailand will be widely recognized and this will help solve economic problems.”

Protesters from the Free People Movement are scheduled to gather in front of Parliament at 2pm and maintain a vigil until the vote on constitutional amendments, tentatively scheduled for 10pm tonight.

Pol Lt-Gen Pakkapong Pongpetra, the Commissioner of the Metropolitan Police Bureau, said today that protest leaders have assured that they will not block traffic or access to and from Parliament.

According to the Public Assembly Act, protesters are not allowed within 50 metres from government premises.  Police said, however, that, if there are many protesters, they will close some parts of the road in front of Parliament to allow protesters to rally. 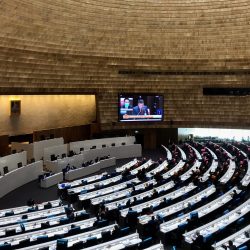