Parliament has voted overwhelmingly to set up a joint committee to study motions seeking amendments to the Constitution in a move seen by the opposition bloc and anti-government protesters as a delaying tactic.

Hundreds of protesters rallying outside the chamber shouted in anger after hearing about the vote.

Members of the House of Representatives and the Senate voted 432-255 with 28 abstentions to set up a committee to study the motions and report back to the Parliament within one month.

Pheu Thai and most of the opposition parties boycotted the 45-member committee.

The vote followed two days of intense debate on the six motions seeking to amend the Constitution.

After the debate ended at around 6 pm, government’s chief whip Wirat Rattanaseth said he needed another 30 days to discuss with MPs and senators the  motions before bringing them back for a vote.

Palang Pracharat MP Paiboon Nititawan then proposed the setting up of a panel to study contents of the six motions.  He claimed that most senators did not have sufficient time to study the motions as they were made available to them only a week before the debate.

Opposition chief whip Suthin Klangsaeng objected to the proposal and accused the government parties and senators of deliberately stalling the motions.  Both the opposition bloc and the protesters wanted the Parliament to vote on the motions after the debate.

The protesters, who began rallying since afternoon, tried to block the legislators from leaving the compound but decided to disperse at around 9.30 pm.

The protesters have scheduled another major rally for October 14. 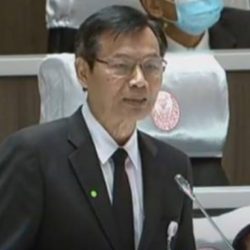 “Instead of amending the constitution, we should change people’s behaviour” - Senator Thawil