This handout photo from the Royal Thai Army taken in late April 2021 and released on May 3, 2021 shows military personnel detaining illegal immigrants in an undisclosed location near the border areas between Thailand and neighbouring countries

Thai authorities have been asked to increase field checks on factories and businesses, to make sure that they hire properly registered and fully vaccinated migrant workers from neighbouring countries, to prevent a new outbreak of COVID-19, similar to that in Samut Sakhon last December.

According to the Centre for COVID-19 Situation Administration (CCSA), 3,833 illegal immigrants from Myanmar, Laos, Cambodia, and Malaysia – most of whom from Myanmar and Cambodia – were arrested by Thai authorities between November 1st and 7th. On November 2nd alone, 1,194 were arrested. No figures are available on the number of those who managed to evade arrest.

Most migrant workers reportedly paid Thai and neighbouring human trafficking gangs several thousands of baht each to help them sneak into Thailand, via natural border crossings, to find jobs in various provinces, among them Bangkok, Samut Sakhon and Chiang Mai.

Director-General of the Disease Control Department Dr. Opart Karnkawinpong admitted that the recent influx of illegal workers from neighbouring countries is a cause for serious concern, pointing out that previous outbreaks of COVID-19 were traced to fresh markets, where many migrants work.

While admitting that many businesses in Thailand are in need of foreign migrant workers, he stressed the need for these workers to enter Thailand legally and to be properly registered, so they can be traced to determine whether they have been vaccinated. 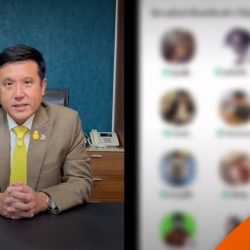