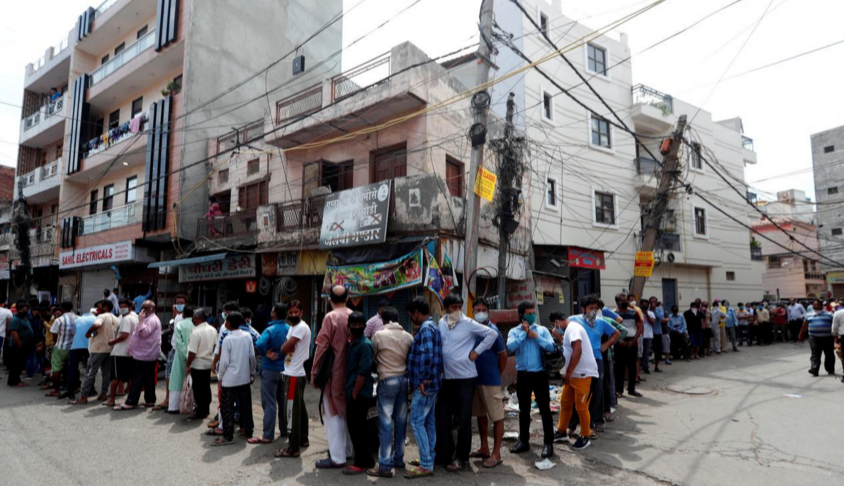 People stand in a queue to buy liquor outside a wine shop during an extended nationwide lockdown to slow the spread of the coronavirus disease (COVID-19), in New Delhi, India, May 4, 2020. REUTERS/Adnan Abidi

NEW DELHI (Reuters) – Hundreds of people queued outside liquor stores in New Delhi on Monday as the Indian capital began easing some curbs after a 40-day lockdown against the coronavirus, while some offices resumed work with fewer staff and traffic trickled into the streets.

The nationwide lockdown, among the world’s strictest, is being relaxed in some areas with fewer infections, although it will stay until May 17, the government said last week. The measure was adopted on March 25 and extended twice.

Many government cars were among the traffic on Delhi’s boulevards on Monday, while police at checkpoints peered into cars to ensure there were no more than two occupants. Everyone wore masks.

By about 9.30 a.m., a line of more than 500 people had formed outside a liquor store in the capital’s eastern area of Kalyan Puri, before the shop was closed and police baton-charged the crowd to disperse it, a Reuters witness said.

Police were asking some outlets to close in line with an order from excise authorities, said Ajay Kumar, a Delhi government official in charge of liquor stores.

“We want to keep the shops open,” Kumar told Reuters, without elaborating.

The easing could drive further infections in India, which has tallied more than 42,500 cases and 1,300 deaths in a steady rise, but some state governments want economic activity to resume as revenue dwindles and millions struggle without income.

“We have to get prepared to live alongside corona, we have to get used to it,” Delhi’s chief minister, Arvind Kejriwal, told a Sunday briefing, outlining steps to seal off 97 infection hotspots while opening up the rest of the city of 20 million.

In neighbouring Pakistan, the number of confirmed cases neared 20,000, with 462 deaths. Authorities in Sri Lanka and Nepal reported 718 and 75 cases respectively.