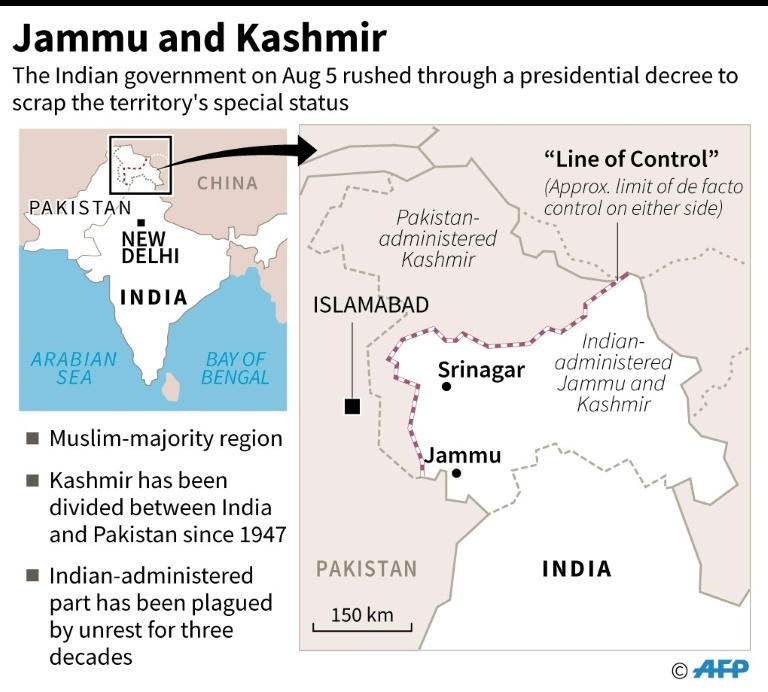 New Delhi stripped Kashmir of its seven-decade-long autonomous status via a presidential decree on Monday, hours after imposing a massive security lockdown in the state to quell any unrest.

“Together we are, together we shall rise and together we will fulfill the dreams of 130 crore (ten million) Indians,” Prime Minister Narendra Modi tweeted late Tuesday after parliament approved the move to turn India’s only Muslim-majority state into administrative territories controlled by his government.

“A momentous occasion in our parliamentary democracy, where landmark bills pertaining to Jammu and Kashmir have been passed with overwhelming support,” he added.

Kashmir has been divided between India and Pakistan since their independence in 1947, and the two sides have conflicting claims on the territory, over which they have fought two wars.

Reports emerged Tuesday of sporadic protests in Indian-administered Kashmir, where at least six people were admitted to a hospital in the main city Srinagar with gunshot wounds and other injuries, a source at the facility said on condition of anonymity.

Pakistan’s military added that it “firmly stands” by Kashmiris following a meeting of the army’s top commanders.

Pakistan and China both have long-running boundary disputes with India.

Indian-administered Kashmir has been in the grip of a rebellion against Indian rule since 1989, and analysts have warned the scrapping of its autonomous status could trigger fresh unrest.

Earlier, national security adviser Ajit Doval said in a report to his department that there was “peace and normalcy” and “no agitation” in Kashmir after the announcement, local media reported.

But with mobile and internet services shut down and Kashmir virtually cut off from the outside world since the early hours of Monday, limited news emerged from the region.

A traveller who arrived in India’s capital New Delhi on Tuesday from Srinagar told AFP on condition of anonymity that he had heard “intermittent gunfire” and other weapons since Monday.

He said he heard soldiers shouting during the night, while government troops were deployed at “every five steps”.

“My car was checked at least 25 times on the way to the airport and it took me almost four hours to cover a distance of hardly 30 minutes,” he said.

In Pakistani-administered Kashmir, locals fear a new round of hostilities may be unfolding.

“I can’t see the return of normalcy anytime in the near future,” said a resident there, Raja Aqeel.

In Muzaffarabad, the largest city on the Pakistani side, an estimated 500 people protested.

There were also demonstrations against the decision in the Indian city of Kolkata, as well as in Bangladesh.

India detained three Kashmiri political leaders and a court order seen by AFP on Tuesday said they had engaged in activities “likely to cause breach of peace” and lead to a “serious law and order situation”.

Initially placed under house arrest at the weekend, former chief ministers Mehbooba Mufti and Omar Abdullah along with regional party leader Sajad Lone were reportedly then taken to an official guesthouse on Monday.

The court order also said authorities feared the trio could organise a public rally which is currently banned in Kashmir as part of the emergency lockdown.

Rahul Gandhi, until recently the head of the main opposition Congress party, said the decision was an “abuse of executive power” that had “grave implications for our national security”.

Monday’s decree, rushed through by Modi’s right-wing Bharatiya Janata Party (BJP) government, removed from the constitution the special status that Kashmir had held after the region was divided between India and Pakistan in 1947.

The clause in the constitution had prevented Indians from outside the territory buying land or claiming government jobs in Kashmir. It also limited the power of the Indian parliament to impose laws in the state, which had a separate constitution and a flag. 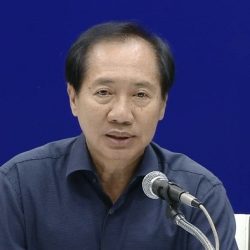 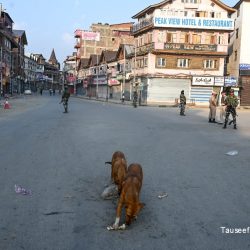