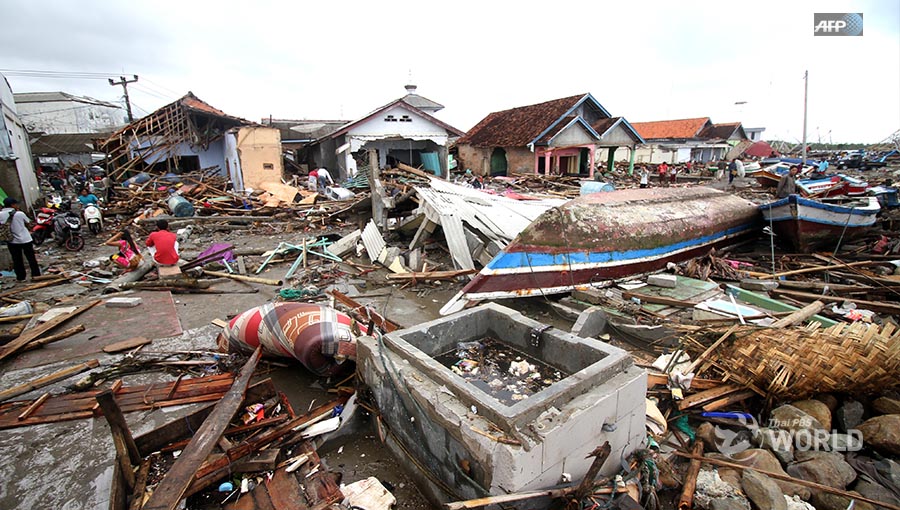 This general view shows destroyed or damaged homes in Sumur on Java island on December 24, 2018

Indonesian rescuers raced to find survivors Monday after a volcano-triggered tsunami killed at least 281 people, with experts warning the devastated region could be slammed by more deadly waves.

Rescue teams used their bare hands, diggers and other heavy equipment to haul debris from the stricken area around the Sunda Strait, as thousands were evacuated to higher ground.

The powerful tsunami struck without any warning on Saturday night, sweeping over popular beaches of southern Sumatra and the western tip of Java and inundating tourist hotels and coastal settlements.

More than 1,000 people were injured and the death toll “will continue to rise”, said disaster agency spokesman Sutopo Purwo Nugroho.

Hundreds of buildings were destroyed by the wave that left a tangled mess of corrugated steel roofing, timber and rubble at Carita beach, a popular spot for day-trippers on the west coast of Java.

Beachside cottages at one resort were flattened while the dining room’s mud-caked floor was strewn with smashed chairs and tables, utensils and spilled cups of ice cream.

“The military and police are searching the ruins to see if we can find more victims,” said Dody Ruswandi, a senior official at the disaster agency, adding that the rescue effort was likely to last a week.

In devastated Sukarame village, Sunarti waded through knee-deep water as she searched for belongings outside her destroyed house — and waited for aid to arrive.

“There’s been no help at all so far,” the 61-year-told AFP from the flattened hamlet.

“Some people are starving.”

It was the third major natural disaster to strike Indonesia in the space of six months, following a series of powerful earthquakes on the island of Lombok in July and August and a quake-tsunami in September that killed around 2,200 people in Palu on Sulawesi island, with thousands more missing and presumed dead.

he vast archipelago nation is one of the most disaster-prone nations on Earth due to its position straddling the so-called Pacific Ring of Fire, where tectonic plates collide.

Experts say Saturday’s tsunami was likely triggered by a massive underwater landslide following an eruption of the Anak Krakatoa volcano in the Sunda Strait.

Unlike those caused by earthquakes, which trigger alert systems, such tsunamis give authorities very little time to warn residents of the impending threat.

“I was chatting with a guest at our place when my wife opened the door and she suddenly screamed in panic. I thought there was a fire, but when I walked to the door I saw the water coming.”

Richard Teeuw, a geohazard expert from the University of Portsmouth in England, said the eruption and landslide may well have destabilised the volcano, heightening the risk of another tsunami.

“The likelihood of further tsunamis in the Sunda Strait will remain high while Anak Krakatoa volcano is going through its current active phase because that might trigger further submarine landslides,” Teeuw said.

Dramatic video posted on social media showed a wall of water suddenly crashing into a concert by pop group “Seventeen” — hurling band members off the stage and then flooding into the audience.

Two band members were killed along with its manager, while three others, including the lead singer’s wife, are missing.

Front man Riefian Fajarsyah posted a picture online of he and his wife kissing in Paris with the Eiffel Tower in the background.

“Today is your birthday — I want wish you a happy birthday in person. Come home soon, honey,” he wrote in the caption of the photo, which was posted Sunday.

Anak Krakatoa, which forms a small island in the Sunda Strait between Java and Sumatra, emerged around 1928 in the crater left by Krakatoa, whose massive eruption in 1883 killed at least 36,000 people and affected global weather patterns for years.

Oxfam and other international aid agencies said they would help in the aftermath, as local rescuers evacuated the injured and set up tarpaulins to provide shelter. 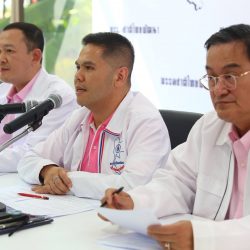