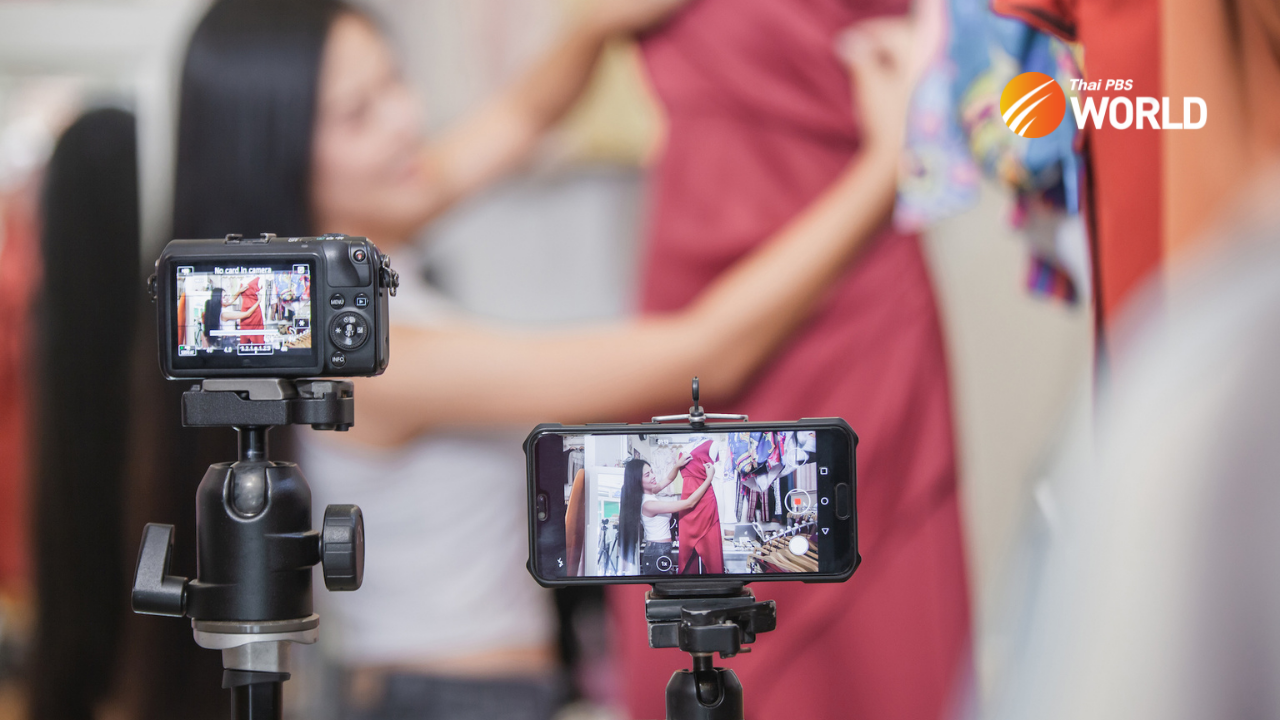 With its offer of bargains, interaction, entertainment and value to consumers and the chance for retailers to earn significant cash, it’s little wonder that livestream shopping on social media is such a big hit. There are fortunes to be made and prominent Livestream seller and well-known YouTuber Pimradaporn “Pimrypie” Benchawatthawat is living proof.

Every time Pimrypie gets in front of a camera, she sells tens of thousands of items in minutes. Each “live” means over a million items sold. In a video clip released early this month, she claimed she once received orders for 10 million items. The video, which lasts almost 20 minutes, takes viewers on a tour of her billion-baht warehouse that stores a wide range of products – her own brand and others from her house brand Nam Para (fermented fish sauce) to the most expensive imported perfume.

Her online sale channel “Pimrypie Sells Everything” (Pimrypie Kai Tookyang) has over 6 million followers. Each live sale draws thousands of viewers and dozens of comments. She’s so successful that even in the middle of the night, she has a live audience of more than 20,000 eager buyers. Her YouTube channel has 5 million subscribers.

According to a report by Shopline Thailand, Thailand’s live-commerce sales have shot up in recent months, increasing by 300 percent between April and June over the first quarter of 2021.

Thai consumers spend an average of two hours each time they tune into a livestream sale and dish out between 1,000 and 3,000 baht a pop.

Live streaming originated in China several years ago. Driven by the pandemic, it has gained popularity on e-commerce and social media platforms including Taobao, Tmall, and JD.com in China.

A unique shopping experience for consumers and sellers

And it’s not just the bargains and exclusive deals: Shoppers are also attracted by the interactive and social elements of live shopping.

She recently got a good deal from a livestream seller on Facebook when she bought a supplement for joint pain, which normally retails for 1,190 baht, for just 920 baht.

“I get excited by going up against other customers as we hunt for products offered in limited numbers. Sometimes I don’t ‘CF’ when I join Pimrypie’s live sessions. Her shows are fun to watch. They make me laugh and put me in a good mood,” says Wannapa.

CF is an acronym commonly used by livestream sellers and buyers. It stands for “confirm”. It’s used when the buyers confirm their purchases and are ready to transfer the money to the store’s account.

Livestreaming shopping is beneficial to sellers too.

Natcha Eiambootlop says live selling is convenient and budget-friendly as it doesn’t require a huge investment and production equipment. She is a live streaming seller who runs an online store called “G Fashion” on Facebook. It’s a family-run business that sells mostly apparel for trendy women, such as dresses to office workers and nurses who are the shop’s main customers. Prices range from 200 to 300 baht per piece.

“When you are selling online, you don’t need a physical shop space. By going ‘live’, you can present products through the stream by letting viewers see how they look.

“I can live stream from my smartphone to Facebook Live, trying on clothes and telling the audience how they fit and feels,” she says.

Natcha, 25, is passionate about livestream shopping. She started livestreaming sales as a hobby selling clothes she didn’t use via the social media platform to get some extra money while she was still atuniversity. She started taking it seriously three years ago with an investment of just 5,000 baht. Her apparel business has grown in leaps and bounds over the past two years fuelled by the pandemic. Today, she says she generates a six-figure income per month from live sales through her own channel.

“We figured that making 1,000 baht in sales per live session would be good enough so we put our energies into starting a business. I can’t believe we got this far and that our business is so lucrative,” she says.

“It’s impossible to have 200 visitors coming to your store at the same time if you have a physical store. But with live selling, it can happen,” she says.

Her live sessions draw at least 200 viewers and have peaked at 3,000 at its peak. She once reaped 300,000 baht in sales in a three-hour session during a shopping festival.

All livestreaming sellers know that audience engagement lays the foundation for live sale success. They use different strategies and tactics to increase audience engagement, maintain their customer base attract new potential buyers.

Natcha encourages her audience to share her live video on their Facebook feeds. In exchange for their shares, she offers them a discount on their purchases. She also holds limited-inventory live sales on Facebook Live to boost sales.

“Sharing lets me reach more people and increases the chance to meet potential buyers. Offering a discount can keep viewers engaged so we have them coming back for more,” she says.

She added that consistency matters when it comes live sales. She runs four sessions a week in a bid to maintain a steady engagement.

Pimolsiree Wattansrikhunporn, 55, opts for talking directly about her products such as discussing features and telling viewers why they should buy them. She runs a small family business selling seafood products on Facebook.

“When I go live, I simply let my viewers see how big and fresh our crabs and shrimps are. I tell them how to cook them perfectly and give some recipes. Viewers ask me many questions. It’s very engaging,” she says.

Tayada Phenkea, 45, who sells swimsuits, uses a similar strategy. She teaches them how to choose the right suit to fit their body shapes. She also wears a bikini she is selling to show how it looks.

“I want to boost their confidence. Everyone can wear and look good in a bikini. You should try one if you’ve never worn one before.” she says.

She uses a pricing strategy to attract bargain hunters and buys Facebook ad to get her products in front of the right audience and draw them back to her channel.

With these all tricks, her sales have grown quickly. She says the money she earns from live sales surpasses her monthly salary. Tayada is a marketing manager and sells goods online as her second job.

Distinctive characters stand out in the crowd

A key element that makes Pimrypie’s live sales appealing is its entertainment value. More than just showcasing a product she is selling, she puts on a show that involves her viewers. The concept is interactive and fun.

She often opens with funny music parodies and ridiculous dances. She expresses her frustration in verbal rants while selling everything from perfumes, pots, toothbrushes, blankets, cat litter, crispy veggies snacks, mineral water and fermented fish sauce. She also plays a comment game that builds a sense of connection between herself and her fans.

Another tactic that Pimrypie uses is to create viewer loyalty. Instead of calling her viewers “customers”, she calls them “my dear friends”, which gives them a sense of belonging. She also uses language that is direct but sincere.

Her unique appearance with tattoos on both arms is another draw, as is her bubbly personality. She is also famous for doing good deeds for others. She has released video clips showing her helping people in need and providing assistance to those struggling to survive the pandemic.

For those who want to give livestreaming a go, the experts have some advice.

Natcha says handsome profit can be made by capitalizing on the current trend.

“You need to catch the trends and keep an eye out for new products to add to your store before everyone else. New fabrics and patterns of clothes are coming out every day. So, with a new product that just hit the market and the good timing, you will find a niche,” she says.

Naming your page is not trivial, and she suggests keeping it simple and specific. This can make it easy to get your page at the top of the list in a Facebook search.

“You should come up with a name that is easy to recognise. If you are selling fashionable items and your niche is teenagers, call it something chic and trendy, possibly with a name in English. But if your customers are housewives, the name should be simple and recognizable.” Natcha says.

Pimolsiree suggests doing research and picking up some tips from other sellers and Youtubers.

“I didn’t know much about running an online business and going live but my mistakes have helped it grow. You have to figure out what works for you.

“Be real. Your personality is part of your brand when you’re selling online and going live.” she says.

Tayada says stop thinking and start doing, urging anyone with a business plan for an online store, to take action.

“You don’t have to have lots of fancy equipment to get started. You can learn from trial and error. So, just do it.” she says. 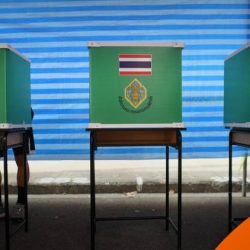