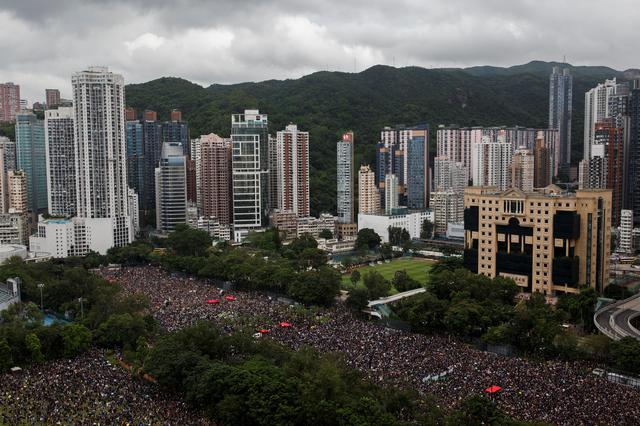 HONG KONG (Reuters) – At least 100,000 anti-government protesters joined a mass rally in Hong Kong on Sunday, filling major thoroughfares in heavy rain in the eleventh week of what have been often violent demonstrations in the Asian financial hub.

Sunday’s turnout showed that the movement still has broad-based support despite the ugly scenes witnessed during the past week when protesters occupied the Chinese-ruled city’s airport, for which some activists apologized.

“It’s bloody hot and it’s raining. It’s a torture just to turn up, frankly. But we have to be here because we have no other choice,” said a 24-year-old student named Jonathan who was at the rally that began in Victoria Park in the Causeway Bay district of Hong Kong island.

“We have to continue until the government finally shows us the respect that we deserve,” he said.

Anger over a now-suspended bill that would allow criminal suspects in Hong Kong to be extradited to mainland China erupted in June, but the rising unrest has been fueled by broader worries about the erosion of freedoms guaranteed under the “one country, two systems” formula put in place after Hong Kong’s return from British to Chinese rule in 1997.

Protesters held aloft placards with slogans including “Free Hong Kong!” and “Democracy now!” and umbrellas to shield them from the rain. The crowd in Victoria Park was peaceful and included elderly people as well as the middle aged, young people and families, with some parents carrying toddlers.

Despite rally organizers not having permission to march, the park could not accommodate the crowd, which thronged the streets around the park. Many protesters headed toward the city’s financial center, chanting for the city’s Beijing-backed leader, Carrie Lam, to step down.

One protester shouted at others who were jeering at police “Today is a peaceful march! Don’t fall into the trap! The world is watching us,” prompting the group to move on.

It was impossible to put an exact figure on the number of protesters put Reuters journalists, reporting from around the territory, put the total at at least 100,000.

Aside from Lam’s resignation, demonstrators are seeking complete withdrawal of the extradition bill, a halt to descriptions of the protests as “rioting”, a waiver of charges against those arrested, an independent inquiry and resumption of political reform.

“When we were young, we didn’t think about it. But my son tells me: After 2047, what will happen to me?,” said a history teacher named Poon, referring to the year when the 50-year agreement enshrining Hong Kong’s separate system will lapse.

‘WE ARE HONG KONGERS’

Police have come under criticism for using increasingly aggressive tactics to break up demonstrations and on Sunday some people handed out balloons resembling eyeballs, a reference to the injury suffered by a female medic who was hospitalized after being hit by a pellet round in the eye.

On Saturday, however, a demonstration in support of the government attracted what organizers said was 476,000 people, although police put the number of attendees at 108,000.

The anti-government protests present one of the biggest challenges facing Chinese President Xi Jinping since he came to power in 2012. And with the ruling Communist Party preparing to mark the 70th anniversary of the founding of the People’s Republic on Oct. 1, the crisis in Hong Kong has come at a sensitive time.

Beijing has struck an increasingly strident tone over the protests, accusing foreign countries including the United States of fomenting unrest.

Scenes of Chinese paramilitary troops training at a stadium in the city of Shenzhen, which borders Hong Kong, gave a clear warning that mainland intervention by force is possible.

Last week, protesters who occupied the terminal at Hong Kong’s airport forced the cancellation of nearly 1,000 flights and detained two men they thought were pro-government sympathizers, prompting Beijing to liken the behavior to terrorism.

“We are Hong Kongers. We are here for our future. We feel for the teenagers,” said Frances Chan, 60, a retired journalist attending Sunday’s rally.

She said only a few protesters had used violence, sparingly, and that it was brought on by pressure from authorities and police.

“Actually, we want peace and freedom,” she said. “If the government would just listen to the five requests, things would calm down.” 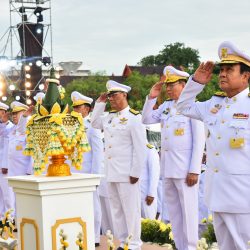 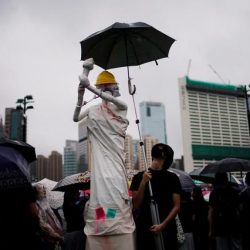