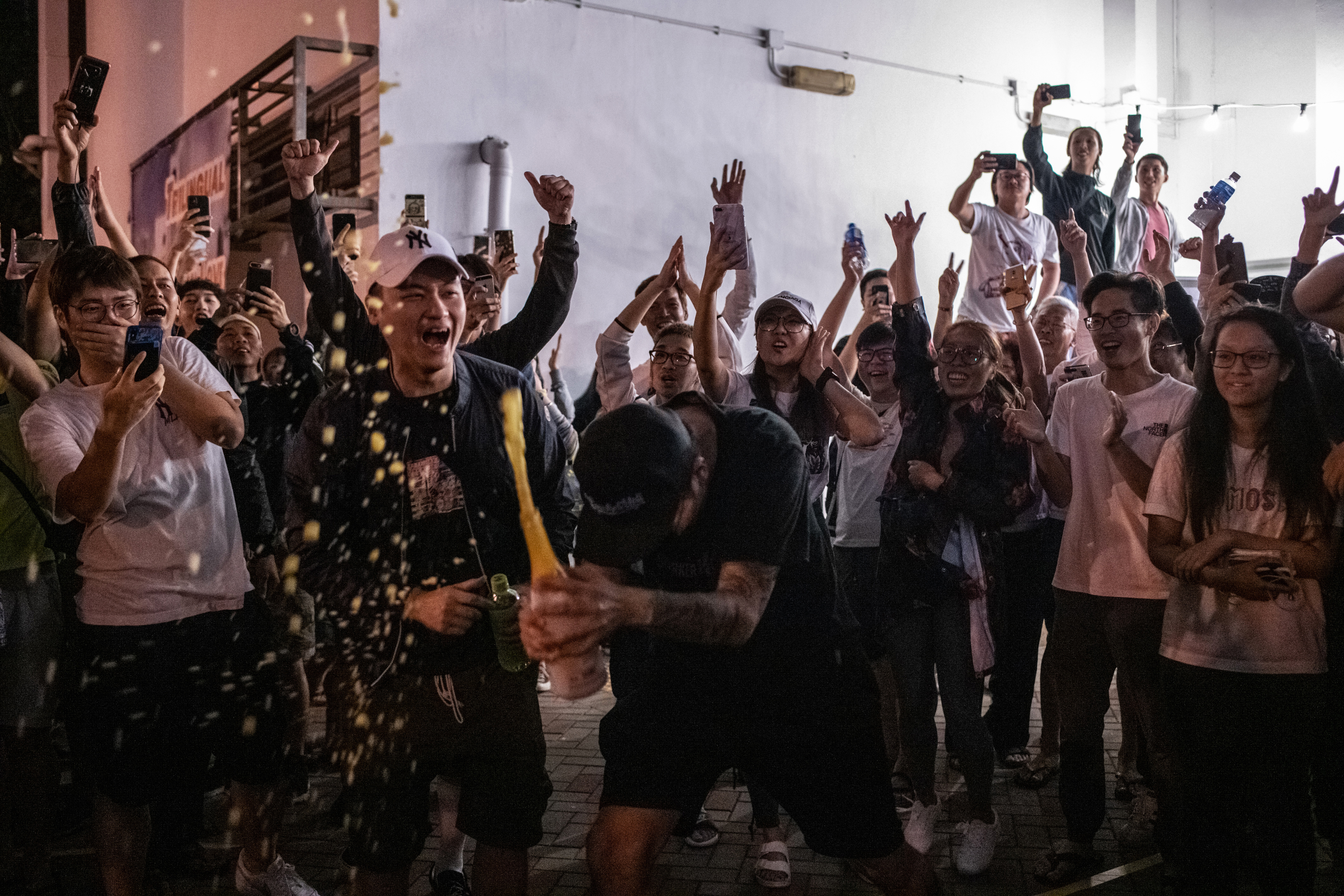 A pro-democracy supporter (C) opens a bottle of champagne outside a polling station to celebrate after pro-Beijing candidate Junius Ho lost a seat in the district council elections in Tuen Mun district of Hong Kong, early on November 25, 2019. – Hong Kong’s voters turned out in record numbers for local council elections that the city’s pro-democracy movement hopes will add pressure on the Beijing-backed government to heed their demands after months of violent protest. Lengthy queues snaked out of polling stations across the territory in the election for 18 district councils, where high turnout is expected to benefit democratic forces. (Photo by Philip FONG / AFP)

Hong Kong’s deeply unpopular leader vowed Monday to “listen humbly” to voters after the pro-democracy camp scored a crushing victory in community-level elections that revealed broad public support for a protest movement that has stirred months of violence.

In a rout that stunned the semi-autonomous territory, candidates seeking to loosen control by China seized an overwhelming majority of the 452 elected seats in the city’s 18 district councils, bodies that have historically been firmly in the grip of a Beijing-aligned establishment.

The result, the first vote to be held since protests engulfed the city, was a humiliating rebuke to Beijing and Chief Executive Carrie Lam.

She has stubbornly dismissed calls for political reform and repeatedly suggested that a silent majority supported her administration and opposed the protest movement.

“The government will certainly listen humbly to citizens’ opinions and reflect on them seriously,” Lam said in a statement issued by the government.

But she gave no specifics on the likely response.

Opponents quickly called on Lam to accede to a five-point list of demands, including direct elections for the city’s legislature and leadership and a probe into alleged police brutality against demonstrators.

The Labour Party, another leading component of the pro-democracy bloc, attributed the election result to “the sweat, blood and tears” of protesters.

There has been no tear gas fired in Hong Kong for a week, rare respite for a city upturned by months of chaos and violence.

The lull follows some of the most intense clashes yet between police and protesters at the city centre PolyU campus.

Dozens of newly elected councillors marched on Monday evening on the campus urging police to allow the small number of hardcore protesters who remain holed-up inside to leave freely.

“The people of Hong Kong have spoken,” Paul Zimmerman, a pro-democracy councillor re-elected in Sunday’s poll, said in a speech outside PolyU.

“Now is time for the government to respond. Don’t fail Hong Kong again.”

Chatter on a popular web forum used to urge people to turn out for protests called for a march on Sunday to press the government to respond to the movement’s demands.

Millions took to the streets earlier this year after Lam’s government introduced a bill to allow extraditions to China’s opaque judicial system.

It was eventually withdrawn, but the resulting public anger unleashed broader demands and led to violent clashes between police and protesters.

The outcome is “a sound repudiation of the (Hong Kong) administration and Beijing’s policy toward Hong Kong,” political analyst Willy Lam said.

But it does not mean Beijing will budge on the protesters’ demands, he added.

Pro-democracy candidates grabbed 388 seats — a stunning net gain of 263 — according to local media, with the establishment holding on to only 59. Five went to independents.

Dominic Raab, the foreign minister of Britain, which handed the territory over to China in 1997, said: “There is now an opportunity to find a way through the crisis with political dialogue that reflects the legitimate aspirations of the people of Hong Kong and respects the one country two systems model.”

Chinese state media moved to downplay the poll debacle for pro-Beijing parties, suggesting mischief-making by western governments was at play in the poll run-up while violent protests chiselled away at the pro-government turnout.

“It is hard to imagine how many people’s opinions the election result represents,” ran a commentary in the China Daily.

“When people live under so heavy shadow of the rioters’ terror that they dare not speak out against them.”

A record 71 percent of the 4.13 million registered voters had cast ballots, according to Hong Kong’s election watchdog.

Among the losers were firebrand lawmaker Junius Ho, one of the politicians most loathed by democracy activists, and who was stabbed this month during campaigning.

“The world is turned upside down,” Ho wrote on Facebook after his loss.

The vote is the closest Hong Kong gets to direct representation.

Its legislature is elected by a mix of popular vote and industry groups stacked with China loyalists, a system that ensures Beijing’s control.

District councils have little political sway, but some candidates for next year’s legislative elections will be drawn from the councils, which also will contribute about one-tenth of the 1,200 members of the Beijing-controlled electoral college that chooses the chief executive.

Protests eased in the poll run-up after pro-democracy figures urged calm in a campaign marred earlier by violence.

One pro-democracy candidate, Andrew Chiu, had part of an ear bitten off in an attack while campaigning. He won his race. 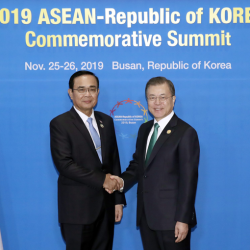 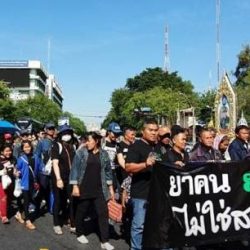