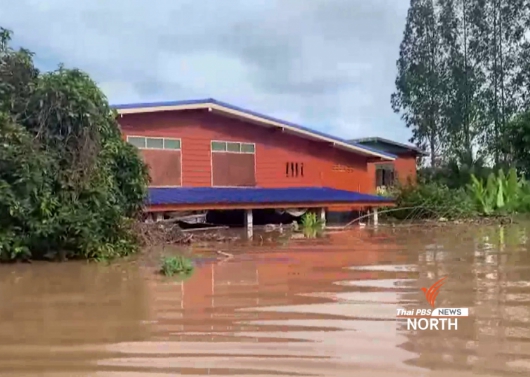 Officials and volunteers in Thailand’s lower northern province of Sukhothai were mobilized Tuesday to install more sand bags to reinforce the flood wall along the Yom River, to prevent the overflowing river from flooding the municipal area.

Sukhothai provincial governor Mr. Maitri Traitilanant said, after an inspection, that the flood wall was at risk of collapsing in nine places, which require immediate repair after the province was battered by heavy rain brought by depression Kajiki.

A special team has been assigned to inspect the areas at risk every 30 minutes around the clock.

Overflowing water from the Yom River swept into two villages in Tambon Yang Sai of Muang district Tuesday night, prompting the residents to rush to move their valuables to higher ground. However, many residents were not quick enough, with some of them complaining that they were caught off-guard by the rapid inundation.

In the northeastern province of Sakhon Nakhon, provincial officials placed blue flags at several strategic locations to advise residents to stay abreast of the weather conditions as other officials stepped up efforts to pump water out of Nong Harn fresh-water Lake, which is now full and threatening to overflow its edges.

The excess water from Nong Harn was pumped into the Gum River to protect the municipal area from possible flooding.

In Thung Chang district of the northernmost province of Nan, rescue workers scoured the Nam Oao River, a tributary of the Nan River, looking for Mrs. Potjamarn Ood-ai, who had reportedly been washed away by strong currents near the Nam Oao Bridge as she was having lunch on the river bank.

The Meteorological Department issued the 11th bulletin at 5am on Wednesday, warning of heavy rain in northeastern and eastern provinces as a result of the Kajiki depression, which was moving north over the South China Sea and away from Vietnam. 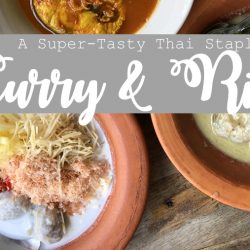 Curry and Rice - A Tasty Epitome of Thai Cuisine