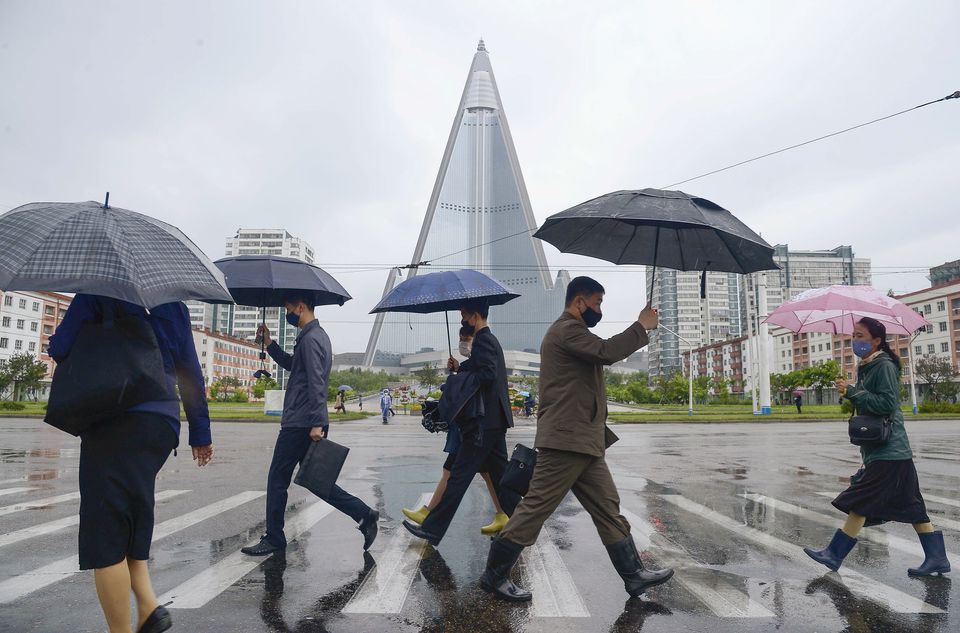 People wearing protective face masks walk amid concerns over the new coronavirus disease (COVID-19) in Pyongyang, North Korea May 15, 2020, in this photo released by Kyodo.

SEOUL (Reuters) – The COVAX global COVID-19 vaccine-sharing programme has scaled back the number of doses allocated for North Korea, international aid organisations said, as the country has so far failed to arrange for any shipments.

A website dashboard maintained by the United Nations children’s agency, UNICEF, shows the number of doses earmarked for North Korea now stands at 1.54 million, down from as many as 8.11 million last year.

This year, COVAX is moving to needs-based vaccine allocations, so the accumulation of previously allocated doses to North Korea is no longer relevant, said a spokesperson for Gavi, the charity that helps operate the vaccine sharing programme.

“Vaccines were allocated to (North Korea) on technical considerations to enable the country to catch up with international immunization targets in 2022 in case the government decides to introduce COVID-19 immunisations as part of the national pandemic response,” the spokesperson said in a statement to Reuters on Thursday.

North Korea is not known to have imported any COVID-19 vaccines, though media reports have suggested at least some key people, such as border control officials, may have been vaccinated.

Last year North Korea rejected planned shipments of AstraZeneca’s COVID-19 vaccine that were being organised under COVAX due to concerns over side effects, a South Korean think-tank said at the time.

“Gavi and COVAX are continuing the dialogue with (North Korea) to operationalize the COVID-19 immunization program,” the Gavi spokesperson said.

North Korea has not officially confirmed a single coronavirus infection, though officials in South Korea and the United States have cast doubts on that the country is COVID-free.

It was one of the first countries to close its borders as the pandemic began to spread in 2020, and only last month began to allow a few trains across its border with China.

North Korea’s parliament approved a 33.3% increase in spending to tackle the pandemic this year, state media reported on Tuesday.