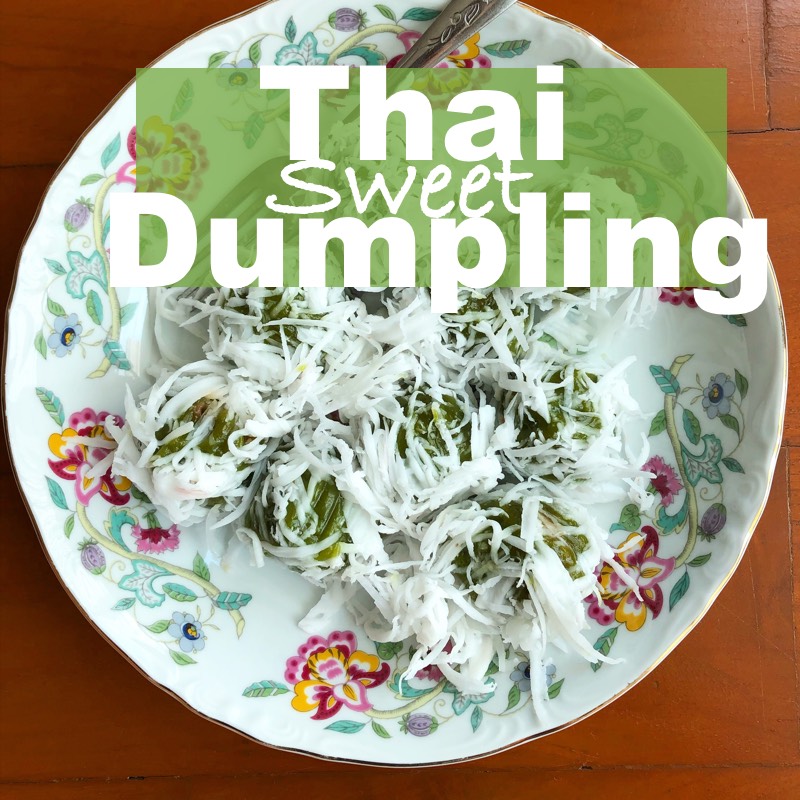 In Thailand, the food’s names oftentimes make them auspicious. Take ‘Kanom Tom,’ the name that means ‘boiled dessert,’ in which the word ‘boil’ in Thai is ‘tom,’ that somehow, in certain situations, means ‘easy peasy.’ No doubt that Kanom Tom is fortunate-sounding enough to be included in the usual treats for deities back in the day.

But Kanom Tom is not our everyday’s dessert, though. Not now, at least, when we are being overwhelmed with so many other kinds of desserts that have overshadowed this old-time favourite. Kanom Tom is considered too simple. Merely a kind of glutinous rice dumpling with candied coconut filling. But then, in its unpretentiousness, a good, truly delicious Kanom Tom is really difficult to find.

Kanom Tom encompasses the three basic ingredients that make many traditional Thai desserts. First, coconut in all forms, from young to real mature. Then, sugar of all kinds from white to brown made from sugar cane to palm sugar and coconut sugar. Also there must be flours, mostly derived from rices – plain or glutinous rice flours. Once you know this, you may be able to deconstruct the next bowl of Thai dessert that is served in front of you. 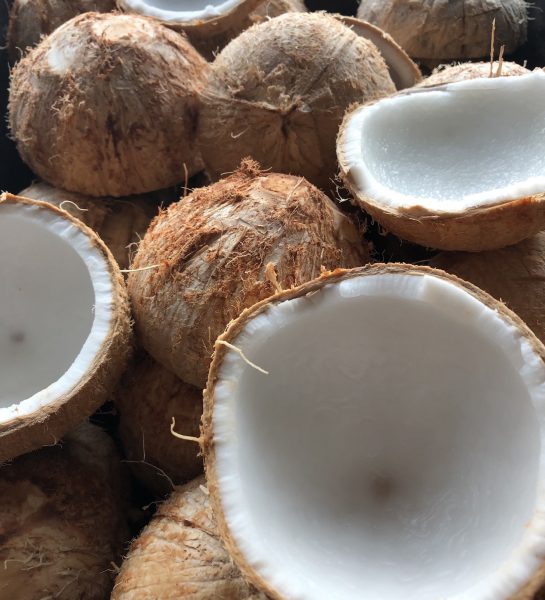 But for me, Kanom Tom is a bit different and special. It is my favourite. I used to be able to buy some on the way back from school and munch my way through home. They used to be ubiquitous, delicious ones I mean. But now, I can hardly find a stall that manages to make them as delicious as they deserve to be. Until, you know, I found this secret place. Just this one that I keep going back to satisfy my regular Kanom Tom cravings. 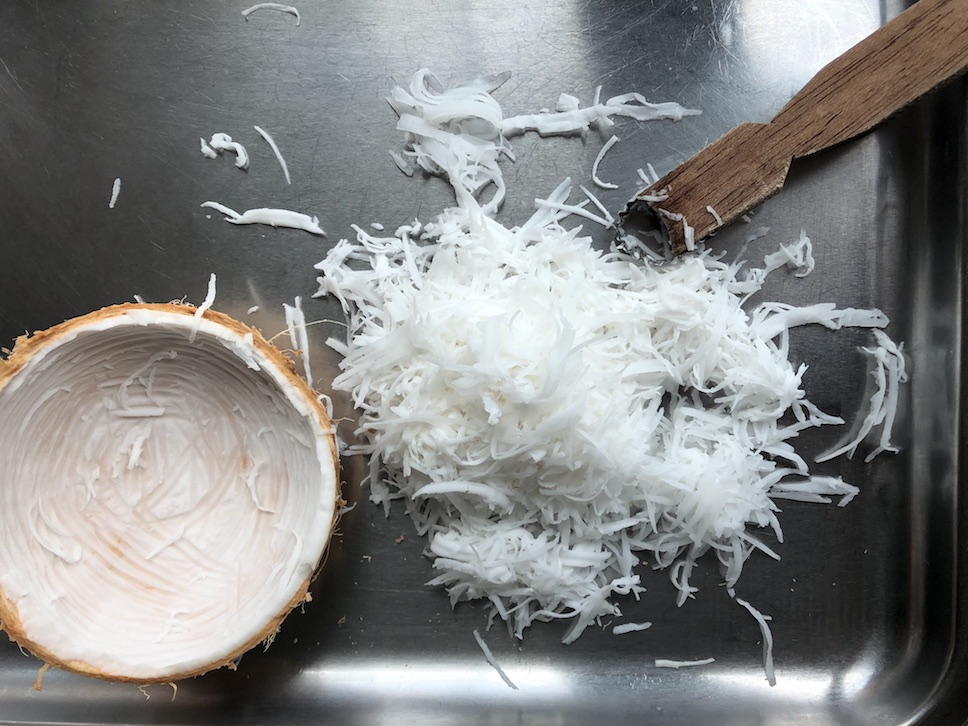 Kanom Tom’s dumpling is the glutinous rice flour mixed with lukewarm water until forming a sticky, elastic dough. For those using plain water, the colour of the dessert will be, of course, white. But for those using pandanus juice or butterfly pea tea, the dough will turn into green and blue colours, accordingly. I, out of ignorance, tried making this dough once, and found that getting the dough into the right consistency requires some hard practicing and, perhaps, tricks, for, not unlike many other Thai desserts, there’s usually no recipes for this one. 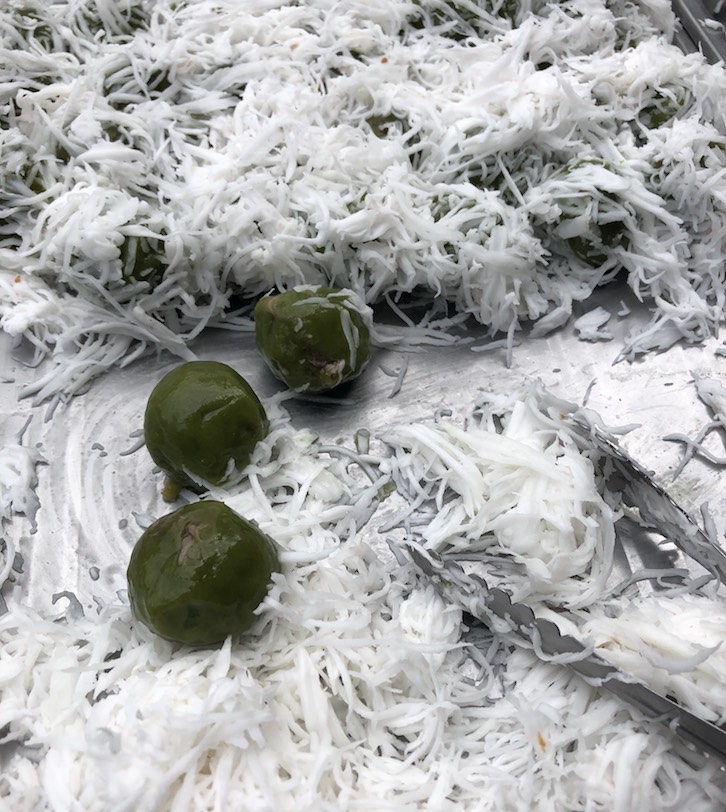 The highlight of Kanom Tom is the coconut. In this case, the best and only right kind is called ‘Mapraw Tun Tuk,’ which is a coconut between the stages of ‘young’ and ‘mature’ with its meat thick enough for hand-grating, yet soft and tender, with some juiciness and sweetness. Beyond this stage, the coconut will have to be grated and squeezed into coconut cream, or ‘Kati,’ which is the base of many Thai curry. 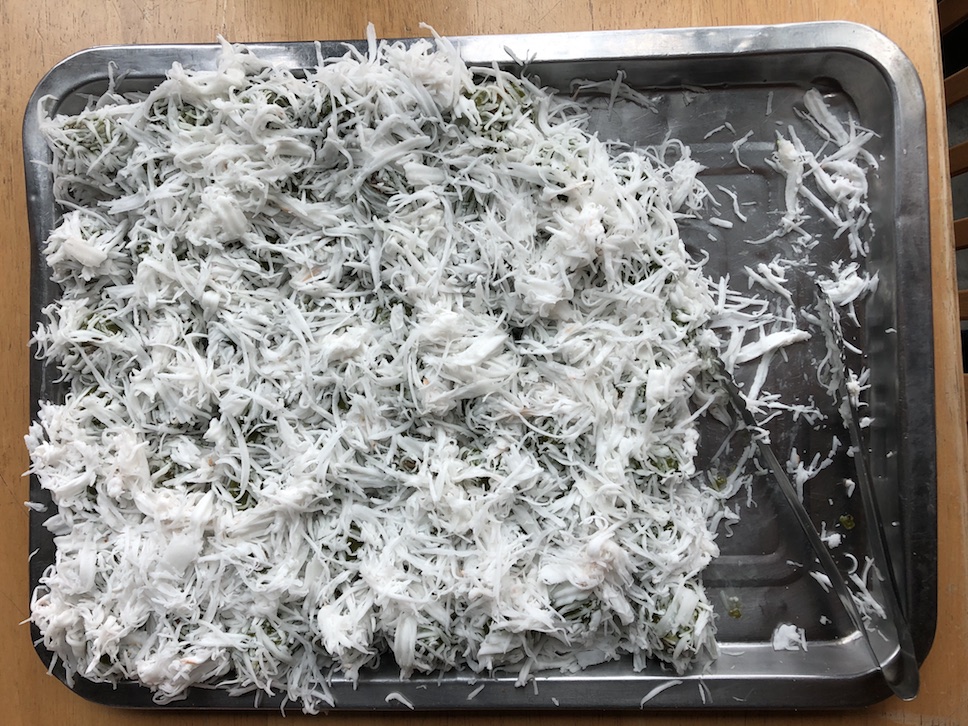 But then, a good Mapraw Tun Tuk is not that easy to find. One can roam a couple of fresh markets and come out empty-handed. Or with a wrong kind. And that’s why I so cherish this dessert. Simple, but cannot be taken at face value. It requires only the best basic ingredients to make them shine. And a real eater to distinguish the fact.