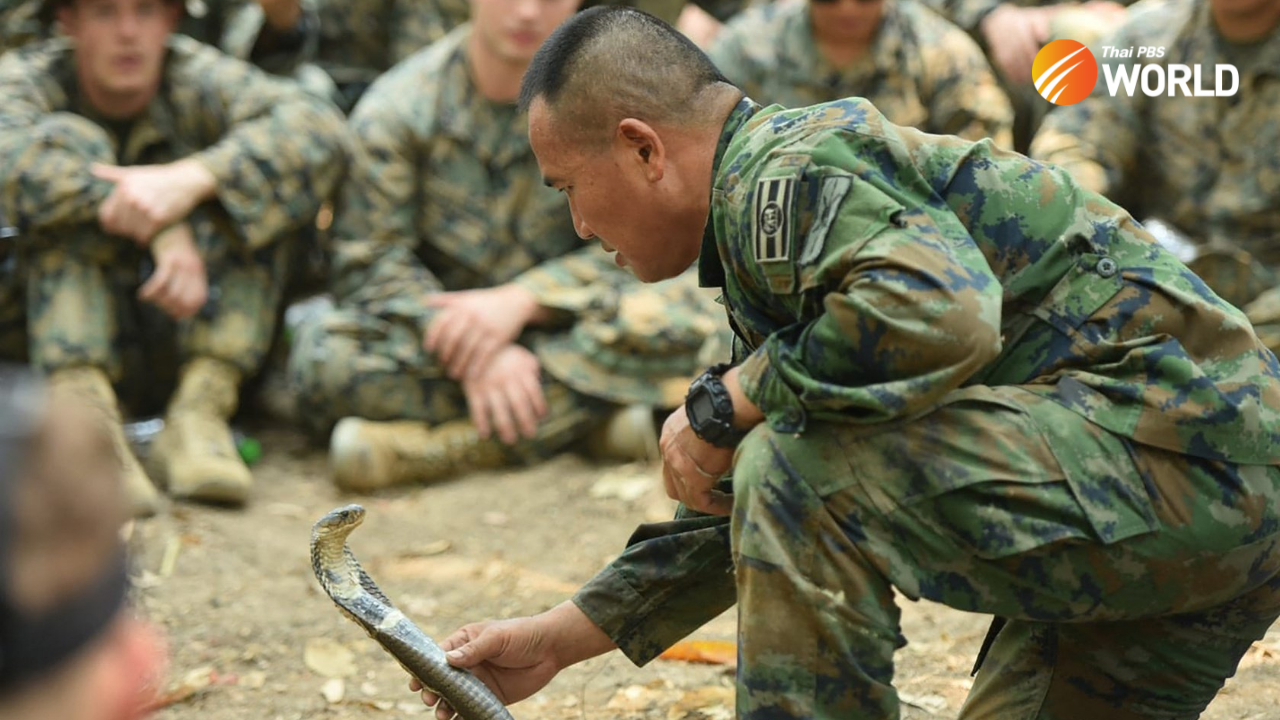 A Thai Marine demonstrated how to handle a cobra to the US Marines during a jungle survival training as part of the Cobra Gold military exercise in Ban Chantaklem, Chantaburi in February 2020. (Photo by Royal Thai navy)

Hosted by Thailand for the past four decades, the Indo-Pacific multination war games known as Cobra Gold make headlines every year – not just for military affairs but also for their history, politics and wildlife conservation.

The upcoming Cobra Gold 2022 is in the news because it has been scaled down for a second year running and military-ruled Myanmar has been left out.

Formally launched in 1982, these wargames have their roots in 1956 when the Thai Navy and the US Marines held a joint amphibious landing to forge military ties between the two countries. The exercises back then were known as “Operation Teamwork”.

Thailand and the United States have been allies since they signed the Southeast Asian Collective Defense Treaty (Manila Pact) in 1954 in a bid to halt the spread of communism through the region. Many joint drills followed, but the code “Cobra Gold” was used for the first time in 1982 when it became a comprehensive military exercise. The air force joined that year and army troops began participating in 1983.

Cobra Gold focused on hostile communist forces in Thailand’s neighboring countries, notably Vietnam, until the end of the Cold War. The war games were then adjusted to cover peacekeeping, counterterrorism, disaster relief, and humanitarian assistance drills.

Retaining its training grounds in Thailand, Cobra Gold became a multination Indo-Pacific exercise when Singapore joined in 2000. It then expanded to include as many as 29 countries as both participants and observers.

Exercises during the pandemic

The 41st Cobra Gold scheduled for February 20 to March 5 will be a “light year” version, with exercises scaled-down because of the ongoing COVID-19 pandemic.

This year some 3,460 troops from 20 countries will be participating, including 1,953 soldiers from Thailand, 1,296 from the US, 50 from Singapore, 41 from South Korea, 36 from Malaysia, 35 from Japan, and 16 from Indonesia. Joining them in humanitarian relief drills will be 18 soldiers from Australia, 10 from China, and five from India.

All observers were left out this year, but the most notable absence was Myanmar. Thailand provided no clear explanation for why the Myanmar military, also known as the Tatmadaw, was excluded, though media outlets pointed to the coup that ousted Aung Sang Suu Kyi’s elected civilian government in February last year.

Coups and military violence are taken seriously when it comes to Cobra Gold. The US decided to downgrade the exercises in 2014 when the Thai military ousted Yingluck Shinawatra’s government, while Myanmar was rebuked in 2018 for widespread killings of Muslim Rohingya in Rakhine state.

Myanmar was admitted as a Cobra Gold observer in 2012 when the country was under a quasi-democratic regime.

This year, the war games will include four major exercises: Command Post Exercise in the Rayong naval base; Humanitarian/Civic Assistance involving the construction of schools in Krabi, Saraburi, Chanthaburi, Trat and Rayong; Humanitarian Assistance and Relief Tabletop Exercise at a Rayong hotel; and small-scale Field Training Exercise for experts in Prachuap Khiri Khan, Lopburi, Rayong and Chonburi.

Unlike heavy-year exercises, there will be no live-fire drills, amphibious landings or aggressive/cruel actions like killing snakes and drinking their warm blood as part of survival training.

Conservationist group People for the Ethical Treatment of Animals (PETA) last year lodged a formal complaint with the US Navy calling for an end to animal cruelty during the exercises. Images of American soldiers slurping blood from decapitated snakes during Cobra Gold training are always highlighted in media coverage of the region’s biggest military drill.

It appears that the PETA petition worked, because no cobras were killed last year and this barbaric act will not be repeated this year either, the animal rights group said in a statement on February 10. 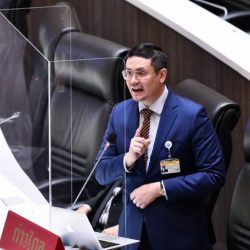 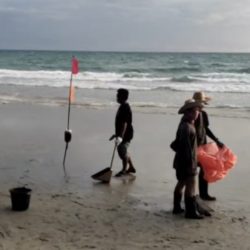