Chiang Rai Governor Narongsak Osotthanakorn has probably been the most visible figure throughout the 10 days of the painstaking search and rescue operation at Tham Luang cave in Chiang Rai province that gripped the whole nation.  He has become a darling of social media users who are impressed with his able and no-nonsense style of handling the situation which at times was chaotic and his clarify in explaining what was going on.

But even the publicity and outpouring of admirations of the past week are unlikely to be of much help for him as far as his career is concerned.   Shortly before the incident, Narongsak had been ordered to be transferred to nearby Phayao province.  In Thai bureaucracy, such transfer can only be seen as a downgrade since Chiang Rai is considered to be a much bigger province in term of sizes and economic importance.

Interior Minister Gen Anupong Paojinda  on Monday confirmed that Narongsak was ordered moved to Phayao because he had problems working with other governmental units in the province. He did not spell out what the problems were.

However, the minister praised Narongsak as  being “a good man” and still has a good future to advance further in his career.

Narongsak will swop positions with Phayao governor who is a native of Chiang Rai, said the minister. The transfer will take effect end of September in annual reshuffle.

“Because he is such a good man that’s why we moved him out of the Land Department and made him an inspector–general and, later on, as Chiang Rai governor,” said Gen Anupong

PM thanks all parties 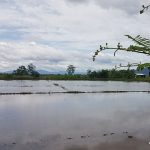 Farmers affected by flood waters from Tham Luang to get compensation