The 19-year-old British woman who claimed to have been drugged and raped while vacationing on Koh Tao island of Surat Thani’s Koh Phangan district should come and file a complaint with Thai police before the statute of limitations in the case expires on Sept 25, Region 8 Provincial Police commissioner Pol Lt Gen Sorasak Yenprem said on Thursday.

Pol Lt Gen Sorasak said the Region 8 Provincial Police headquarters will send a letter to the British Embassy in Thailand to contact the woman and ask her to come to Thailand and tell the police about what happened  by Sept 25 when the statute of limitations under the Thai law is due to expire.

It is necessary for her to testify to the Thai police and undergo a physical examination, he said.

Pol Lt Gen Sorasak said if the woman was unable to come, she could ask the embassy to file the complaint on her behalf so as to extend the statute of limitations.

The woman claimed after returning to Britain that she had been drugged and raped while on Koh Tao island. She said the police refused to register her rape complaint.

Pol Lt Gen Sorasak said that if what the woman said was true,  the policeman on duty who refused to take her complaint would be subject to legal action.

Meanwhile, in Bangkok, Pol Gen Chakthip Chaijinda, the nationl police chief, said the Region 5 Provincial Police has set up a committee to investigate the  matter. The committee is to finish the investigation in seven days.

On a separate investigation by a team led by Pol Maj Gen Surachate Hakparn, deputy commissioner of the Tourist Police Bureau, Pol Gen Chakthip said the team had sent him reports on the development of the investigation but he would rather not give details because the investigation is still in progress. 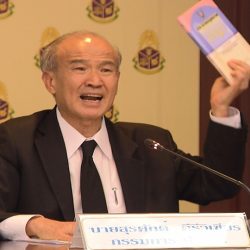