Taliban fighters on Saturday captured the key northern Afghan city of Mazar-i-Sharif and closed in on Kabul, as US President Joe Biden sent more troops to evacuate American personnel and their allies.

Just before residents confirmed the fall of Mazar-i-Sharif, once an anti-Taliban bastion, beleaguered Afghan President Ashraf Ghani addressed the nation, vowing to prevent further bloodshed, despite the rout suffered by Afghan forces over the last 10 days.

But Ghani — who went to Mazar-i-Sharif just days ago to rally his faltering troops — gave no hint in his speech that he would take responsibility for the calamitous military collapse or resign.

Kabul has effectively become the besieged last stand for government forces, who have offered little or no resistance elsewhere.

Insurgent fighters are now camped just 50 kilometers away from the capital, with the United States and other countries scrambling to airlift their nationals to safety ahead of a feared all-out assault.

As a new wave of US military personnel landed to oversee the evacuation of embassy employees and thousands of Afghans who worked for US forces and now fear Taliban reprisals, Biden said more soldiers would follow.

“I have authorized the deployment of approximately 5,000 US troops” to oversee both the evacuations and the final withdrawal of US forces after 20 years on the ground, Biden said after meeting with his national security team.

That represented an influx of 1,000 troops, from the roughly 1,000 already on the ground, and 3,000 soldiers ordered in a few days ago, a US defense official said.

“I was the fourth president to preside over an American troop presence in Afghanistan — two Republicans, two Democrats. I would not, and will not, pass this war onto a fifth,” Biden said.

“They are parading on their vehicles and motorbikes, firing into the air in celebration,” said Atiqullah Ghayor, who lives near the city’s famed blue mosque.

Warlords Abdul Rashid Dostum and Atta Mohammad Noor, who had led a militia resistance in the city to support government forces, had fled to Uzbekistan, about 30 kilometers to the north, an aide said.

Beyond Kabul, the only other cities of any significance not to be taken yet were Jalalabad and Khost — Pashtun-dominated and unlikely to offer much resistance.

As the Taliban closed in on the capital, panicked residents formed long lines outside banks, hoping to withdraw their savings. Some branches appeared to have already run of cash.

Residents near Pul-e-Charkhi prison outside the far eastern reaches of Kabul told AFP they heard gunfire coming from the facility.

In his first address to the nation since the Taliban launched their sweeping offensive, which was recorded, Ghani said he wanted to stop the violence.

“I will not let the imposed war on people cause more deaths,” he said, appearing somber and sitting before an Afghan flag.

Ghani said the armed forces could be “remobilized” and consultations were taking place to try to help end the fighting, but offered few specifics on what his administration was planning.

The presidential palace later said “a delegation with authority should soon be appointed by the government and be ready for negotiation”. Further details were not immediately available.

In Kabul, US embassy staff were ordered to begin shredding and burning sensitive material.

For Kabul residents and the tens of thousands who have sought refuge there in recent weeks, the overwhelming mood was one of apprehension and fear.

Muzhda, 35, a single woman who arrived in the capital with her two sisters after fleeing nearby Parwan, said she was terrified.

“I am crying day and night,” she told AFP. “If the Taliban come and force me to marry, I will commit suicide.”

The Taliban imposed an ultra-austere brand of Islam on Afghanistan during their 1996-2001 rule.

The scale and speed of their advance have shocked Afghans and the US-led alliance that poured billions into the country after toppling the insurgents in the wake of the September 11, 2001, attacks.

Days before a final US withdrawal ordered by Biden, individual Afghan soldiers, units and even whole divisions have surrendered — handing the Taliban even more vehicles and military hardware for their lightning advance.

Biden on Saturday warned the insurgents that any attempt to disrupt the US evacuation mission would be met with a “swift and strong US military response”.

The Taliban offensive has accelerated in recent days, with the capture of Herat in the north and, just hours later, the seizure of Kandahar — the group’s spiritual heartland in the south.

Asadabad, the capital of Kunar in the east, and Gardez also fell on Saturday before Mazar-i-Sharif.

After Ghani’s TV speech, Kabul-based analyst Sayed Naser Mosawi said it appeared the president was “willing to give into some sort of settlement — if that doesn’t mean surrender”. 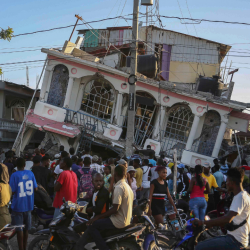 Haiti searches for survivors after quake kills at least 304