It can be both. Future Forward Party leader Thanathorn Juangroongruangkit can be just a fever, but the fever can last for a long time, enough to make him a sustainable threat of the powers-that-be.

Chamlong Srimuang was there before. He created a political phenomenon that thrashed the Democrat Party in elections in Bangkok. He was succeeded as a political mega star by Thaksin Shinawatra, who, likewise, became a big thorn in the Democrats’ side.

Most analysts are comparing Thanathorn to Thaksin, though, as they seem to have more similarities. First off, Thanathorn is facing the kind of legal trouble that Thaksin faced when Thailand’s political crisis started to brew.

After becoming prime minister, Thaksin faced a share transfer scandal, in which he moved his company shares to poor servants, allegedly to avoid stock market restrictions imposed on people owning big lots of stocks. Now, Thanathorn is facing a legal controversy over his previous ownership of media shares, which could still doom his election candidacy.

Chamlong was a phenomenon but he was anything but a major threat. Thanathorn, therefore, is more comparable to Thaksin. Moreover, Chamlong’s lifestyle has always been modest and he has never been in any multi-million-baht business. Thanathorn and Thaksin are rich businessmen and both were hit by major share controversies.

Importantly, Chamlong was not associated with any unorthodox ideology. Neither did he face accusations that his political belief could endanger national security. Thaksin, in spite of repeated denials, is always alleged to have controversial political ambitions, although, it has to be said, some of the allegations stemmed from his controversial moves themselves.

Thanathorn has been in an increasingly similar situation. A list of complaints is growing and quite a few of them have to do with his perceived unorthodox ideology or that of other high-ranking people in his newly-founded political party. For example, Thanathorn is criticised for something he said in the past regarding the Khana Ratsadon (People’s Party), which played an instrumental role in changing Thailand’s system from absolute monarchy to constitutional monarchy in 1932. The secretary-general of Thanathorn’s party has also been forced to deny making highly-controversial comments about Thailand’s political culture.

The Future Forward Party has done well in the March 24 general election. Analysts say the success was due to three main factors — Thanathorn’s youthful image that attracted the majority of first-time voters, the dissolution of the Thai Raksa Chart Party that shifted a lot of votes to Future Forward, and the new party’s perceived unorthodox ideology.

It’s the third factor that worries many people. The first factor can go away after a couple of elections. The second factor is linked to the third, meaning votes in future elections can go back to Pheu Thai if Thanathorn is proven to be “just another politician”, albeit one who goes wherever the political wind blows.

He is having a massive number of admirers at the moment. But, like Thaksin, it’s their opposite number that he must be really worried about. And judging from the state Thailand has been in over the past two decades, Thanathorn’s opponents may feel the need to nip it in the bud.

Thanathorn’s looming legal trouble is described as a potential banana skin. It concerns a large number of shares he had in a media company, which were transferred to his mother so that he could qualify as an election candidate. One apparently-private document, which he is relying on, showed he transferred the V-Luck Media Company shares on January 8, before he applied for election candidacy. Another document, which his accusers are relying on, apparently showed the transfer was brought to the authorities’ attention after he became an election candidate.

Another document yet showed a company meeting took place on March 19, just a few days before the election, and there were 10 shareholders attending it. It should not have been 10, the old number of shareholders, the accusers insist, if Thanathorn had effectively transferred all his shares to his mother, who had had V-luck Media shares of her own.

The Constitution prohibits total or partial media ownership by election candidates. If Thanathorn loses the case, he can be disqualified as an MP and face a lengthy political ban. Would such penalty bring his supporters out onto the streets? One thing is certain: Some would view that sort of punishment as a political persecution while others would cheer it.

Controversy is already building around the young billionaire and chances are it will grow. 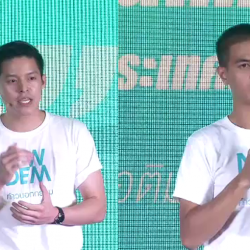