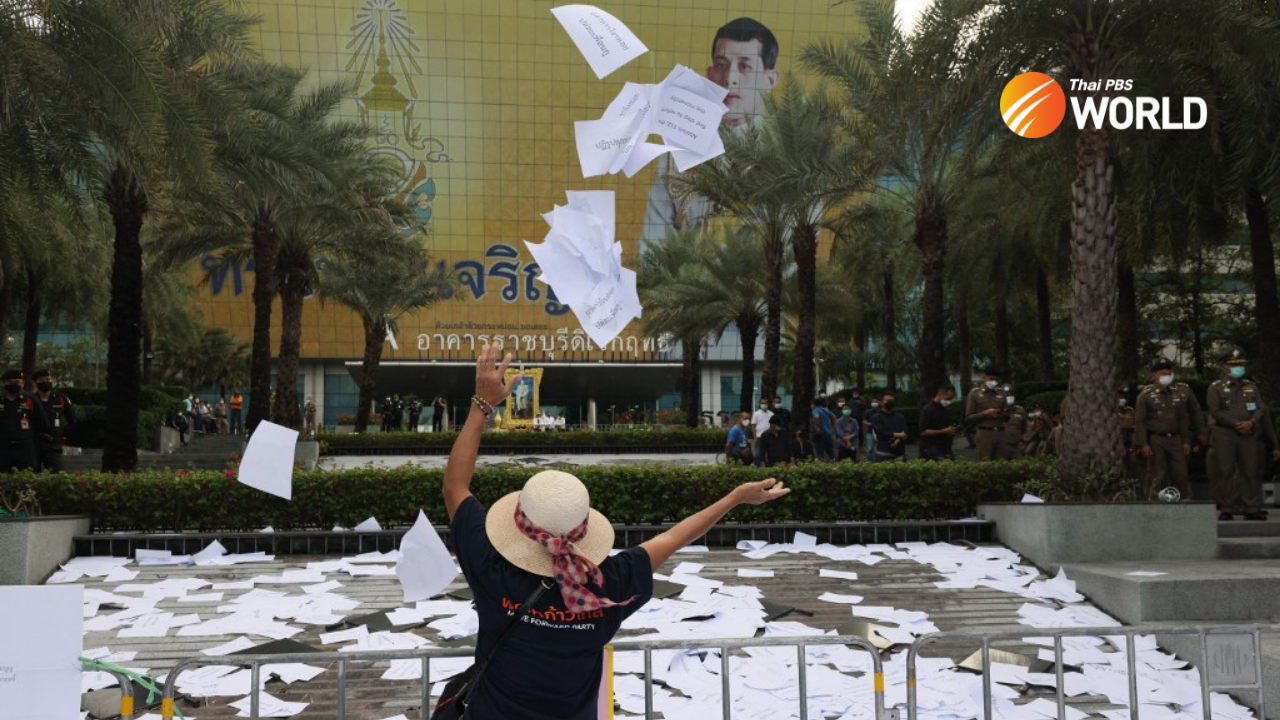 A political activist throws paper signs outside the Constitutional Court of Thailand in Bangkok on November 10, 2021, after the court ruled that three Thai protesters’ demands on monarchy reform amounted to calls to overthrow the constitutional monarchy. (Photo by Jack TAYLOR / AFP)

Before the birth of the youth-led protest movement in 2020, criticism of the monarchy and calls for changes to the institution were only limited to academia.

But after the movement made three core demands – a more democratic Constitution, the resignation of Prime Minister Prayut Chan-o-cha, and reform of the monarchy – the historically taboo issue began being widely discussed in Thai society.

Conservative royalists believe that the third demand is the real focus of the protest movement. Its leaders openly called for monarchy reform almost weekly at rallies throughout 2020 and much of this year.

The demand for royal reforms received support from pro-democracy groups and quickly became a topic of public debate. The issue has now become more prevalent in social media and more media coverage, with a discussion about the monarchy becoming a regular focus of academic seminars.

The public debate boosted momentum behind efforts to amend Thailand’s lese majeste law or Article 112 of the Criminal Code. The law states that defaming, insulting or threatening the King, the Queen, the Heir-apparent or the Regent carries a penalty of three to 15 years in prison.

However, Prime Minister Prayut Chan-o-cha last month voiced opposition to the push for change to the law. The PM insisted the moves were damaging the country’s most revered institution.

Lèse-majesté prosecutions have risen sharply since the 2014 military coup, with leaders of anti-establishment protests arrested after openly criticizing and even insulting the Thai monarchy.

Police complaints have also been filed against people using social media to attack key members of the royal family. At least 156 people, including 13 minors, have been charged with lese majeste since protests began last year, according to the Thai Lawyers for Human Rights group.

But with the push for monarchy reform seemingly gaining momentum, a Constitutional Court verdict last month seemed designed to silence the discussion.

For viewers of foreign media, available through Thai cable TV packages, it has become the norm to see unscheduled messages filling the screen and blocking content for several minutes, a tool used to censor content which may be deemed to be touching upon the highly sensitive topic of the monarchy or to be unfavourable to the Thai government.

On November 10, the court ruled that speeches on monarchy reform delivered by three protest leaders – Arnon Nampa, Panusaya “Rung” Sithijirawattanakul and Panupong “Mike” Jadnok – amounted to attempts to overthrow the country’s democratic system with the King as head of state.

It was Panusaya who first unveiled the movement’s 10 demands for monarchy reform during a rally at Thammasat University’s Rangsit Campus in August last year.

The court also ordered the trio and their allies to end all moves against the monarchy.

The verdict has huge implications, according to observers.

Most significantly, it could silence the discussion on monarchy reform as people fear being penalized by the court ruling if they speak out. Authorities warned that the verdict is binding on all relevant actors.

Meanwhile, the public will likely see fewer reports in the media about calls for royal reform. Media regulator the National Broadcasting and Telecommunications Commission (NBTC) recently asked digital TV broadcasters to refrain from covering the protesters’ demands for changes to the monarchy, citing the Constitutional Court verdict.

The NBTC warned that broadcasters who reported calls for monarchy reform could face fines, suspension or cancellation of their licenses. Speculation is that the warning will lead to even more self-censorship by the media.

Moreover, efforts being spearheaded by the Ratsadon Group to abolish the draconian law, and by Move Forward to amend it, are likely to run into more obstacles.

Move Forward is risking dissolution by pushing for monarchy reform – the same fate suffered by its popular predecessor, Future Forward.

Natthaporn Toprayoon, a former Ombudsman’s adviser who filed the petition that led to the Nov 10 court ruling, said he would ask the Election Commission to consider dissolving Move Forward based on the verdict.

The Ratsadon Group remained defiant, holding two rallies to protest the verdict and again call for the lèse majesté law to be scrapped.

The group vowed to continue rallying against the Prayut government’s economic and political policies, calling for a “golden year of nationwide protest” starting in January.

However, it remains to be seen how much momentum their campaign can build in the face of a court verdict that could trigger the arrest of Ratsadon’s leaders. 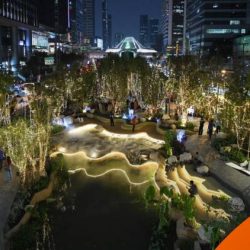