A 14-year-old female junior high school student, attending a school in Thailand’s southern province of Phatthalung, has committed suicide after she was allegedly expelled by her teacher for failing to show up on the first day of the new school term on May 9th and for allegedly failing to pay the school fees.

The tragic case of the student who was about to start her year 9 (Mathayom 3) education went viral on social media, with many comments criticising the teacher and the management of the school. The latest report says that the director of the Phatthalung education office, Somchai Ronglua, will visit the school to investigate.

Another student, at the same school and who is junior to the victim, said that the girl was very depressed after learning that she was being expelled. She said that she came from a broken home and had lived with relatives in Songkhla province since she was very young.

She claimed that the victim was preparing to travel to Phatthalung from Songkhla for school, but there was no public transport to take her to the bus terminal.

Her teacher called her the next morning, enquiring about why she did not show up, and was told the reason. The teacher then allegedly reprimanded and expelled her from the school, said the student.

“No money, no parents. Stop thinking about coming back to school to meet friends. The heartache.  Normally, we talk with and consult each other. We have been helping each other all along,” said the student in one of her Facebook posts.

One parent commented that she does not understand why the teacher didn’t help the student in distress. She said she was saddened that a girl had to face such an experience at home and with a teacher. “Where are the teacher’s ethics?” she asked.

Preechakorn Molika, a civil society network representative for Nakhon Si Thammarat and Phatthalung, said the victim had attended the school since year 7 (Mathayom 1), as he questioned why the school’s management was not aware of the victim’s background and helped out as a school should be a second home for students.

“Your actions have led to the death of a child. You need to take responsibility for what happened. It doesn’t matter if the school fees amount to hundreds of thousands of baht, or millions, there are state budgets that can help children like this,” said Preechakorn as he called for accountability from the school and education officials.

Sarng Anakot Thai party deputy leader and former Democrat MP for Phatthalung province Nipit Intarasombut said in his Facebook post yesterday (Monday) that the student might have miscommunicated with her teacher and only thought she had been expelled from school.

Others have commented on the girl’s allegedly negligent parents, both of whom reportedly refused to pay the girl’s school fees. A leaked chat shows the mother telling her daughter to drop out of school because her loan application had not been approved. 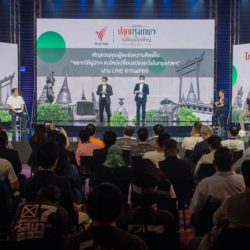