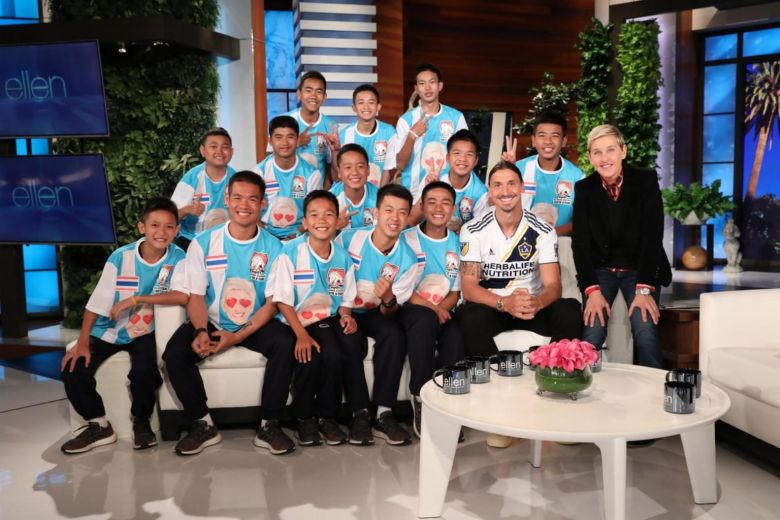 Ellen DeGeneres with members of the Wild Boars soccer team and Swedish football star Zlatan Ibrahimovic beaming at the camera at the show’s California studio. Photo from: TWITTER/ELLEN DEGENERES

The Wild Boars soccer team, who were saved in a dramatic rescue operation in Tham Luang cave in Chiang Rai three months ago, were treated to a major surprise when their footballing hero Zlatan Ibrahimovic showed up during their interview on a popular American talk show.

The former Manchester United star walked into the studio of the Ellen Show where the youngsters and their coach were being interviewed via translator.

Ibrahimovic, who is currently playing for the LA Galaxy, then sat down with the Thai kids.  “This is probably the best team in the world,” the Swedish soccer icon told the show.

“I thought that that was brave, but this team is braver than me,” Ibrahimovic said.  “They showed their collective team work and had patience.”

The boys told the show on Monday that prayer and meditation helped them stay calm during the ordeal.  They said that it was now their dream to get a good education and find a job — as well as play professional football — so they can support their families.