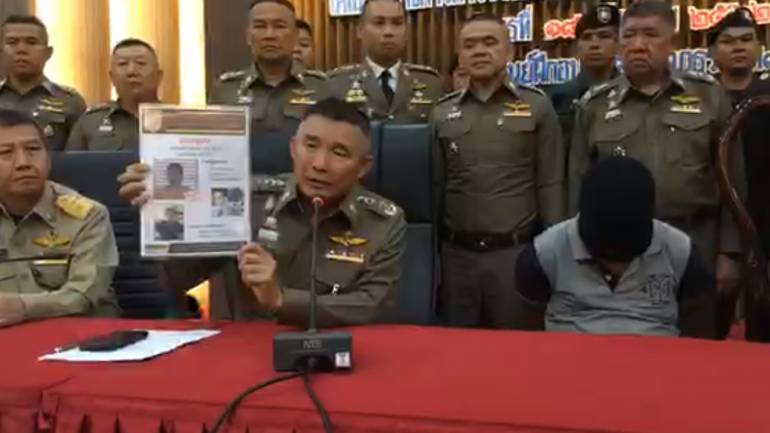 Police announcing the arrest of serial killer Somkid Poompuang at a press conference on Wednesday.

Police on Wednesday credited a student for helping them arrest serial killer Somkid Poompuang while he was riding on a train at Pak Chong district railway station in the northeastern province of Nakhon Rachasima bound for Ayutthaya.

The student said he saw someone who resembled Somkid whose wanted posters had been widely distributed following the murder of a woman in Khon Kaen on December 15.  He said he took a clip of the suspect who was wearing a mask and an oversized jacket with his mobile phone and sent it to police for verification.

Pol Lt-Gen Charoenwit Sriwanich, commissioner of 4th Provincial Police Bureau, said police received the tip-off at about 8am this morning and the images were immediately checked against file photos of the suspect.  A team of police was later sent to Pak Chong railway station where the train was making a stop.

A video news clip  showed several policemen descending on Somkid who was sleeping in a carriage and was obviously caught off guard.  He was later taken to Pak Chong district police station before being transported to Kranuan district police in Khon Kaen, where the sixth victim, 51-year old Mrs. Rasamee Muleechan, was murdered on December 15.

Police said that Somkid, wearing a cap and a face mask, bought train ticket at 5.21am at a quiet Buri Ram provincial railway station.  The train left Buri Ram at 6.07 heading to Ayutthaya.

During initial interrogation this morning, Somkid admitted he killed Mrs. Rasamee in a fit of anger after a fierce quarrel.  He claimed that he met the victim about a month ago via Facebook and planned to marry her. After the murder, the suspect said he stole the victim’s motorcycle and rode to Maha Sarakham and then Buri Ram.

Police later handed over an award of 50,000 baht in cash to the young informant who also received another 30,000 baht from a non-governmental lawyers group which works to help crime victims.

Crime Suppression Division police commander Pol Maj-Gen Jirapob Puridet told the media that Somkid killed his victims in fits of anger, without premeditation, adding that the suspect will be sent for psychiatric evaluation.

Five women, mostly masseuses or women who worked in night entertainment, were killed by Somkid.  He was sentenced to life, but only served 14 years and was released in May this year for good behaviour. 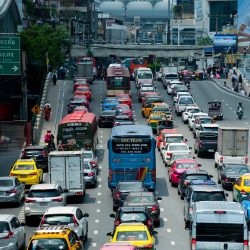 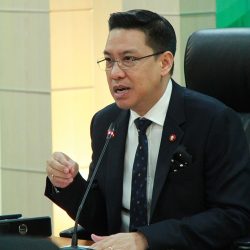