National Office of Buddhism former director Nopparat Benjawattananant has been faulted by the National Anti-Corruption Commission (NACC) for being unusually wealthy, having suspiciously amassed assets worth about 575 million baht during his four-year tenure.

NACC secretary-general Worawit Sukboon told the media today that the anti-graft agency suspected that Mr. Nopparat might be involved in corruption related to funding allocated for the renovation of Wat Pananchoeng during 2014-2015 fiscal years. It was discovered that the assets that he and his wife, Mrs. Pattanan, declared to the NACC, including land, houses, vehicles and life insurance policies, were not proportionate to their incomes.

A probe team, led by Ms. Supa Piyachitti, investigated the couple’s usual wealth and discovered even more assets held in the names of their relatives and other people.

The acquired assets include:

The NACC secretary-general said that their officials have seized assets worth 176 million baht so far, adding that the agency has asked the Office of the Attorney-General to file charges against Nopparat and seven other people with the Criminal Court for Corruption and Misconduct Cases. 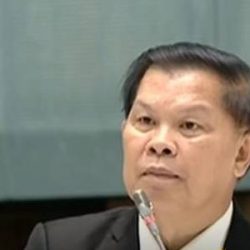