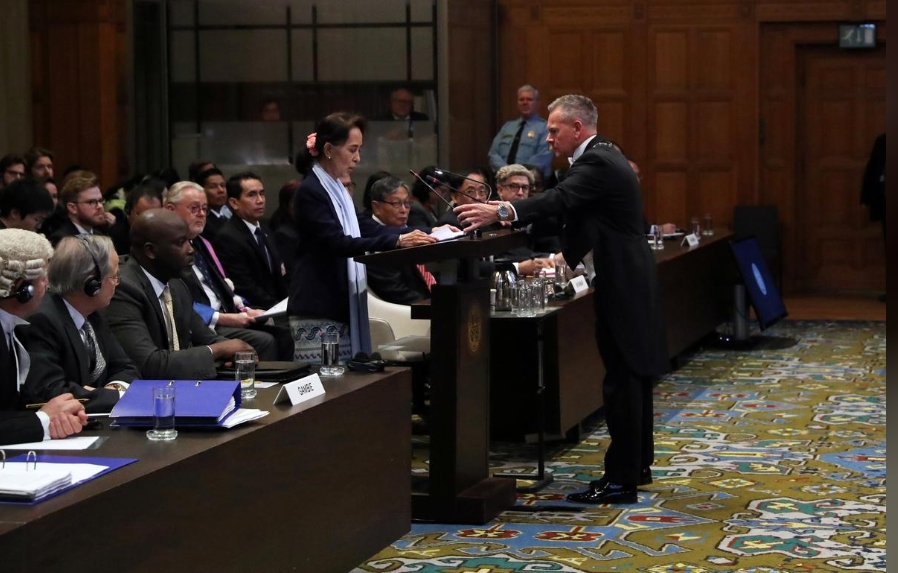 FILE PHOTO: Myanmar’s leader Aung San Suu Kyi speaks on the second day of hearings in a case filed by Gambia against Myanmar alleging genocide against the minority Muslim Rohingya population, at the International Court of Justice (ICJ) in The Hague, Netherlands December 11, 2019. REUTERS/Yves Herman

THE HAGUE (Reuters) – The International Court of Justice will rule on Thursday on a request by Gambia for emergency measures in Myanmar to halt violence immediately against Rohingya Muslims, to protect the ethnic minority and to preserve evidence of past abuses.

The small, mostly Muslim West African country launched the lawsuit in November at the United Nations’ highest body for disputes between states, accusing Myanmar of genocide against Rohingya in violation of a 1948 convention.

The case has not yet been heard in full and Thursday’s ruling deals only with Gambia’s request for so-called preliminary measures, the equivalent of a restraining order for states. It gives no indication of the court’s final decision, which could take years to reach.

Gambia has requested that Myanmar take action to prevent violence, including murder, rape, or other atrocities that could constitute genocide. It has also asked judges to order Myanmar to grant access to U.N. bodies investigating alleged crimes against Rohingya.

The World Court’s rulings are final and without appeal, but it has no real way of enforcing them.

More than 730,000 Rohingya fled Myanmar after a military-led crackdown in 2017, and were forced into squalid camps across the border in Bangladesh. U.N. investigators concluded that the military campaign had been executed with “genocidal intent”.

More than 100 Myanmar civil society groups published a statement saying they hoped international justice efforts would “bring forth the truth” and end impunity.

“Political and military policies have always been imposed with violent force and intimidation upon the people of Myanmar, systematically and institutionally, on the basis of their political and religious beliefs and ethnic identities and continue until the present,” the statement said.

“We understand very clearly that the ICJ case against Myanmar is directed towards those responsible for using political power and military might, and not to the people of Myanmar.”

The camps outside Cox’s Bazar in Bangladesh are home to more than one million Rohingya, making them the world’s largest refugee settlement.

Hopes were running high there for a favorable ruling after years of persecution.

She conceded that disproportionate military force may have been used and civilians killed, but said the acts did not constitute genocide.

Just this week, a government-appointed panel in Myanmar said that, while the military had probably committed crimes, there was no indication of an intent to commit genocide.

Myanmar’s military, known as the Tatmadaw, said it would probe allegations of wrongdoing within its ranks and chain of command, and take action “in conformity with military justice” if credible evidence emerged.

“The Tatmadaw in carrying out its duty to defend the sovereignty of the state and protect the life and property of the local people from terrorist attacks launched by ARSA and its collaborators did so spontaneously,” it said in a statement. “The action was not premeditated.”

A spokesman told reporters at a news conference in the capital, Naypyitaw, that the military would follow the orders of the government if the court ruled against Myanmar.

Although the Myanmar case in The Hague is only at an early stage, human rights lawyer Akila Radhakrishnan said it had already had an impact.

“Since the case was filed, we’ve seen the government take some action to ensure accountability, like issuing a court martial. Now, the military justice system is deeply flawed – but it’s something that wasn’t there before.”

Will there be more twists in gold shop killings?