The 12 Wild Boars footballers and their coach who are all in their monkhood, with the exception of Adul Sam-on who is a Christian, joined the family of the late Navy SEAL member Lt-Commander Samarn Kunan in a religious ceremony to float the ashes of their late hero into the Mekong river in Nakhon Phanom province this morning.

The ceremony was also witnessed by many residents of Nakhon Phanom who showed up by the river bank in front of Indochina market to give a fond farewell to the fomer Navy SEAL member who sacrificed his life for the rescue of the 12 boys and their coach from the flooded Tham Luang cave.

The Royal Thai Navy arranged for a patrol boat from the Mekong River Patrol Unit to take the ceremony participants to the middle of the river where the hero’s ashes were scattered into the river.

Samarn’s widow, Mrs Waleeporn, a native of Nakhon Phanom, said her late husband loved the Mekong River and the environment of Nakhon Phanom and both of them met in this northeastern province 15 years ago. 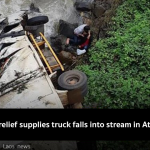 1 killed after relief supplies truck falls into stream in Attapeu