A secondary school dropout and the son-in-law of a family of four generations of bean sprout farmers, invents an automatic bean sprout growing machine to help with the hardships of his family’s work.

As a bean sprout farmers, Nguyễn Văn Quang from Đa Tốn commune, Gia Lam district, Hanoi understands the hardships of the work. This is why he invented an automatic machine system that produces tons of bean sprouts of high quality.

Nguyễn Văn Quang said his wife used to work so hard and never took a break. She used to wake up at 2-3 am and worked until 9-10 pm. “Her hands and feet were exposed to water all day. They were pale and worn down. I wanted to solve those hardships and thought of using technology,” he added.

The hands of a Bat Trang potter are used to working with iron and steel. 15 years ago, Quang began to learn about mechanics. He borrowed many books on manufacturing.

He said the meticulous perseverance he learned as a potter helped him overcome the initial challenges.

“Now I’m confident that with my qualifications, I can make whatever equipment is needed for manual labor.”

In 2006, the first machine Quang invented was a machine that could clean raw materials and filter out the maximum amount of bad beans. It saved a lot of time and was able to clean 50kg of beans in 1 hour.

After building many machines, Quang decided to invest in a 3-story house for growing bean sprouts. He created a closed-process bean sprout growing line with an on-site water supply, a cooling fan in the summer, and a heater in the winter.

From there, after ten years, he developed a continuous flipping machine, which does all seed care work, including automatic watering.

Quang invested 44,000 USD in this house and installed machines. “I had to borrow the money and for it to work smoothly like this I have to put in a lot of effort,” said Quang.

A homemade scale that can weigh bean sprouts at the request of a customer, or a machine that can automatically pack and stamp products. These are some of the additions Quang is developing to perfect his automatic packaging line.

“Every success is fueled by passion. I will continue to invent more machines until my eyes are blurry,” Quang added. 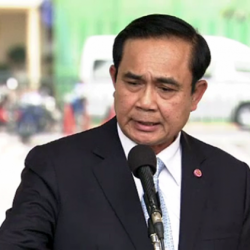