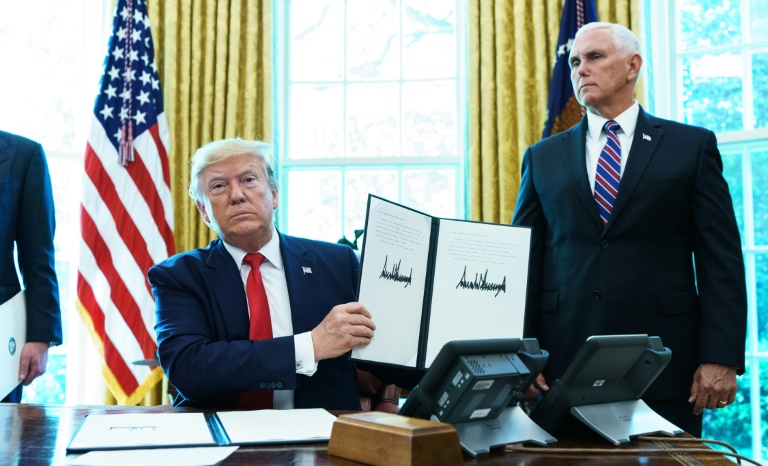 Signing the punitive financial measures in the Oval Office, Trump called them a “strong and proportionate response to Iran’s increasingly provocative actions.”

Repeating that “never can Iran have a nuclear weapon,” Trump said it’s now up to Tehran — which insists it is not seeking nuclear capability — to negotiate.

“We do not ask for conflict,” Trump said, adding that depending on Iran’s response the sanctions could end tomorrow or it “can also be years from now.”

The US Treasury said it will blacklist Iran’s Foreign Minister Mohammad Javad Zarif — a moderate figure and key architect of the 2015 Iran nuclear deal — and eight top commanders from Iran’s elite military force, the Revolutionary Guards, targeting billions of dollars in assets in all.

Tensions are running high after Iran shot down a US spy drone last week and Trump canceled a retaliatory strike at the last minute. In mid-June, mysterious explosions damaged two foreign ships near Iran, raising fears for the safety of shipping lanes used to carry a big portion of the world’s oil supplies.

Amid a flurry of diplomatic activity, the UN Security Council issued a unanimous call for dialogue to address the standoff between the United States and Iran.

But Iran’s UN ambassador said his country, already crippled by existing US sanctions that include the blocking of most of its own crucial oil exports, is being subjected to “economic war.”

“You cannot start a dialogue with somebody who is threatening you, who is intimidating you,” Ambassador Majid Takht Ravanchi told reporters in New York.

French President Emmanuel Macron said he would use a meeting with Trump at the G20 summit in Japan to urge “a constructive solution with the aim of ensuring collective regional security.”

Trump rejects criticism that he is sending mixed messages to Iran.

In a pair of tweets Monday, Trump said US aims regarding Tehran boil down to “No Nuclear Weapons and No Further Sponsoring of Terror.”

On Sunday, Trump told an NBC television interview that if it came to war, Iran would experience “obliteration like you’ve never seen before.” Despite this, he has repeatedly said he’s open to negotiations with Iran’s leaders.

“I think Iran, potentially, has a phenomenal future,” he said in the Oval Office.

Iran says it does not have a nuclear weapons program.

The complex international pact signed by Tehran in 2015 was meant to ensure that its nuclear industry sticks to civilian uses. Trump, however, pulled the United States out of the deal in 2018, seeking its collapse, because he believes it let Iran off the hook.

Further upending US diplomacy, Trump declared Monday that other countries should no longer expect US forces to police the Gulf.

“All of these countries should be protecting their own ships,” Trump tweeted Monday. “We don’t even need to be there.”

Trump’s criticism of the US military burden in the Gulf was welcomed by Iran.

It’s “100% right that the US military has no business in the Persian Gulf. Removal of its forces is fully in line with interests of US and the world,” Zarif, the foreign minister, tweeted.

The US-Iranian dispute is bound up in a complex web of regional rivalries, with US allies Saudi Arabia and Israel long pushing Washington to act aggressively against Iran.

Israel’s Prime Minister Benjamin Netanyahu warned his country, which is widely believed to have an undeclared nuclear arsenal, would do “everything” to stop Iran getting such a weapon.

US Secretary of State Mike Pompeo met Monday with leaders of Saudi Arabia and the United Arab Emirates, telling them to contribute more to maritime surveillance duties near Iran.

Pompeo said he was working to build what he called a “global coalition” against the Islamic republic.

The sultanate of Oman, meanwhile, said reports that it had served as a back channel for the United States to Iran in the aftermath of last week’s drone shooting were “not true.”

The foreign ministry called on Iran and the United States via Twitter “to show self-control and to resolve the pending issues through dialogue.”

Although Trump backed away from a bombing strike in retaliation for last week’s drone downing, US media reports said a US cyber attack took place against Iranian missile control systems and a spy network. 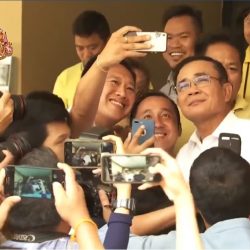 Gen Prayut to turn over a new leaf? 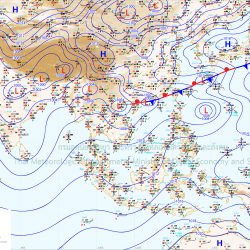