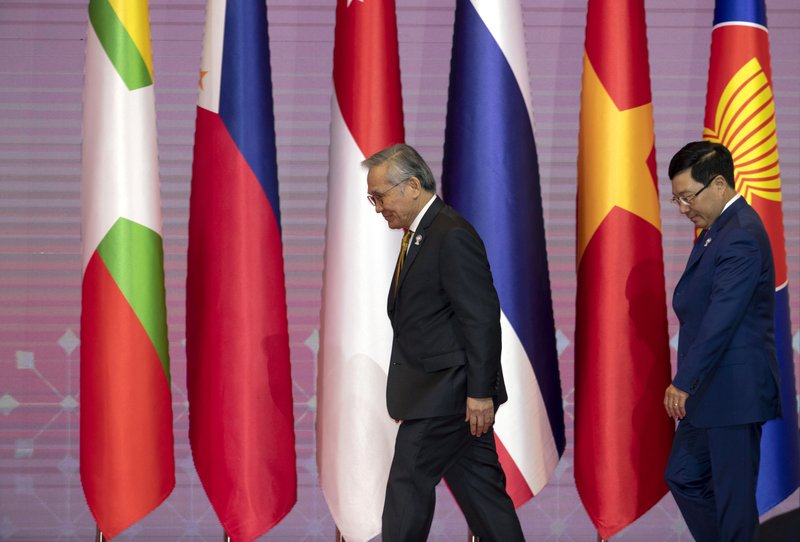 BANGKOK (AP) — Southeast Asian leaders will commit to conclude a long-delayed regional trade pact this year despite lingering odds to fend off risks from a protracted U.S.-China trade war when they gather for a weekend summit in Thailand.

The Chinese sinking of a Philippine boat, which endangered 22 Filipino fishermen, is also expected to put the South China Sea territorial conflicts under the spotlight in the Association of Southeast Asian Nations meetings. The two-day summit gets underway Saturday in the Thai capital of Bangkok, where ASEAN was founded in 1967 in the Cold War era.

Other key issues include the planned repatriation of more than 700,000 Rohingya Muslim refugees, who have fled a military crackdown in Buddhist-majority Myanmar since August 2017 to neighboring Bangladesh in a crisis that has tested ASEAN.

Critics have hit the regional bloc for failing to address the abuses in Myanmar’s Rakhine state that the United Nations has called ethnic cleansing.

A confidential draft of a post-summit communique, which is expected to be issued by the host, Thailand’s junta leader and newly proclaimed Prime Minister Prayuth Chan-ocha, would commit ASEAN to conclude the negotiations for the massive trade pact within the year.

The draft statement urging economic ministers “to exert relentless efforts to reach this target” was seen by The Associated Press.

“We remained concerned over the unabating tide of protectionism and anti-globalization sentiments that continue to plague the global economy and put multilateralism under threat,” the statement said.

Many of the leaders fear the rise of protectionism could have a devastating impact on the regional and global economy.

Trade tensions between the U.S. and China over Beijing’s technology policy and other market access issues have added to strains within the region, especially since President Donald Trump took office in early 2017 and declared his “America First” preference for bilateral trade deals and distrust of international institutions.

The two sides have imposed tariffs on billions of dollars of each other’s products in a standoff that has shown no sign of abating.

ASEAN member states and six other Asia-Pacific countries have been negotiating the market-opening pact, called the Regional Comprehensive Economic Partnership, or RCEP. The accord includes giants such as China and India but not the U.S. and is expected to encompass nearly half the world’s population and 40% of world trade.

Although talks have gradually progressed, negotiators failed to finalize the accord last year due to remaining differences. India balked at widening its markets to imports from rival China, for example, according to participants.

The South China Sea rifts have been a longstanding security concern. But the June 9 ramming of an anchored Philippine boat by a larger Chinese fishing vessel in the Reed Bank sparked an outcry and condemnations in the Philippines, after the Chinese crew sailed away while the fishing boat sank at night. Its Filipino crew was rescued by a Vietnamese vessel.

Philippine President Rodrigo Duterte, who has nurtured close ties with China, has backed Beijing’s initial assertion that the collision was accidental and mocked calls for him to immediately take drastic actions.

Amid criticisms, the volatile Duterte said late Friday before flying to Thailand that he would “talk lengthily” about the disputes in the Bangkok meetings and would question China’s vast claims that encroached deep into the coastal waters of rival claimants.

“Is it correct for China to declare ownership of an ocean?” Duterte asked in a speech.

ASEAN member states Brunei, Malaysia, Vietnam and the Philippines are involved in the long-unresolved conflicts, which escalated in recent years after China transformed seven disputed reefs into missile-protected islands, which can serve as forward military outposts.

Greg Poling of the Asia Maritime Transparency Initiative, which promotes nonaggression in the disputed waters, predicted that “this kind of violence will happen more and more frequently.”

“The incident definitely speaks to the larger problem of China flooding the area around the Spratly Islands with hundreds of subsidized fishing vessels,” which act as China’s militia force, Poling said, referring to a hotly contested region near the Reed Bank.

In the draft statement, ASEAN leaders are expected to stress the importance of not militarizing the disputed region and self-retrainst in carrying out activities “that could further complicate the situation and escalate tensions in the South China Sea.” 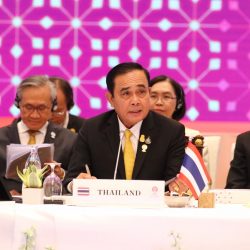 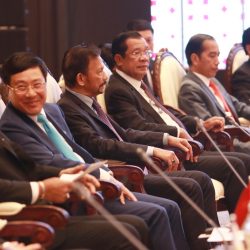 ASEAN Leaders’ Interface with Representatives of the ASEAN Inter-Parliamentary Assembly: AIPA during the 34th ASEAN Summit