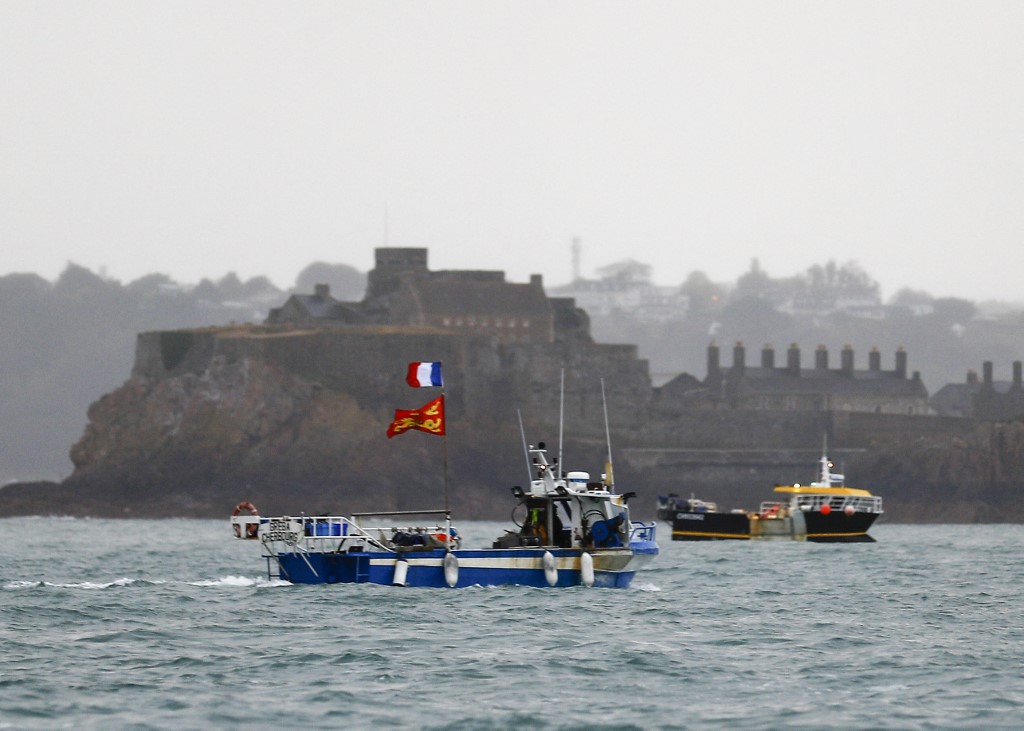 In this file photo taken on May 06, 2021 French fishing boats protest in front of the port of Saint Helier off the British island of Jersey to draw attention to what they see as unfair restrictions on their ability to fish in UK waters after Brexit, on May 6, 2021. France is ready to hold talks with Britain to resolve on ongoing row over fishing rights as long as London meets its obligations under post-Brexit agreements, Prime Minister Jean Castex said on October 28, 2021. – (Photo by Sameer Al-DOUMY / AFP)

London (AFP) – Britain on Monday warned France it will take action if Paris does not withdraw “unreasonable” threats to impose trade measures in an increasingly acrimonious row over post-Brexit fishing rights.

President Emmanuel Macron said on Sunday that Britain must give ground in the dispute or France will trigger trade reprisals on Tuesday, saying: “The ball is in Britain’s court.”

But Britain’s Foreign Secretary Liz Truss told Sky News on Monday that “we will use the mechanisms of our trade agreement with the EU to take action” if Macron goes ahead with his plans.

“The French have made completely unreasonable threats, including to the Channel Islands and to our fishing industry, and they need to withdraw those threats,” she said.

“If somebody behaves unfairly in a trade deal you’re entitled to take action against them and seek some compensatory measures. And that is what we will do if the French don’t back down.”

France is angry that Britain and the Channel Islands of Jersey and Guernsey have not issued some French boats with licences to fish in their waters since Brexit took full effect at the start of 2021.

Paris has vowed that, unless licences are approved, it will ban UK boats from unloading their catches at French ports from Tuesday and impose checks on all products brought to France from Britain.

Jersey’s Minister for External Relations Ian Gorst said on Monday that his officials had followed the terms of the Brexit deal, which stipulates that boats should only be granted licences if evidence is presented that they fished in the waters before 2016.

“We’ve really tumbled over ourselves to be as engaging and as reasonable as possible,” he told Sky News.

“And so to hear that tomorrow, the French will take countermeasures, it’s extremely frustrating. I mean, it’s bordering on they’re just being silly.”

The simmering feud over fish has already seen a British trawler detained in a French port and Paris’s ambassador in London summoned to the Foreign Office for the type of dressing down usually reserved for hostile states not allies.

Britain’s Prime Minister Boris Johnson complained to EU chief Ursula von der Leyen on Saturday that French threats over fishing were “completely unjustified” as he held out the option of invoking the Brexit dispute tool for the first time, drawing the EU itself into the row.

At the same time, Britain is facing the prospect of another fall-out with its closest neighbours over post-Brexit trading arrangements in Northern Ireland.

London is threatening to walk away from the pact, which was designed to keep an open border between the British province and EU member Republic of Ireland, while ensuring that it is not used as a gateway for non-EU goods to illegally enter the single market.

Pro-UK unionists in Northern Ireland believe that by imposing checks on goods heading to the British province from England, Scotland and Wales threatens its place in the wider UK.

And on Monday, hardline unionists were reported to have mentioned dissatisfaction at the protocol as they hijacked a bus at gunpoint and set it on fire.

The incident raises further fears of a return to the violence over British rule that blighted Northern Ireland for decades.

Brussels has offered some compromises, but not on Britain’s red line that the European Court of Justice should not be the arbiter of future trade disputes involving the province, leading to a warning from Maros Sefcovic, vice-president of the European Commission.

“I am increasingly concerned that the UK government will refuse to engage with this and embark on a path of confrontation,” he wrote in the Daily Telegraph.

“I invite the UK Government to engage with us and bring our talks over the finish line.

“We owe it to all the men and women who have worked so hard over the past years to make Northern Ireland a peaceful place to live,” he added.