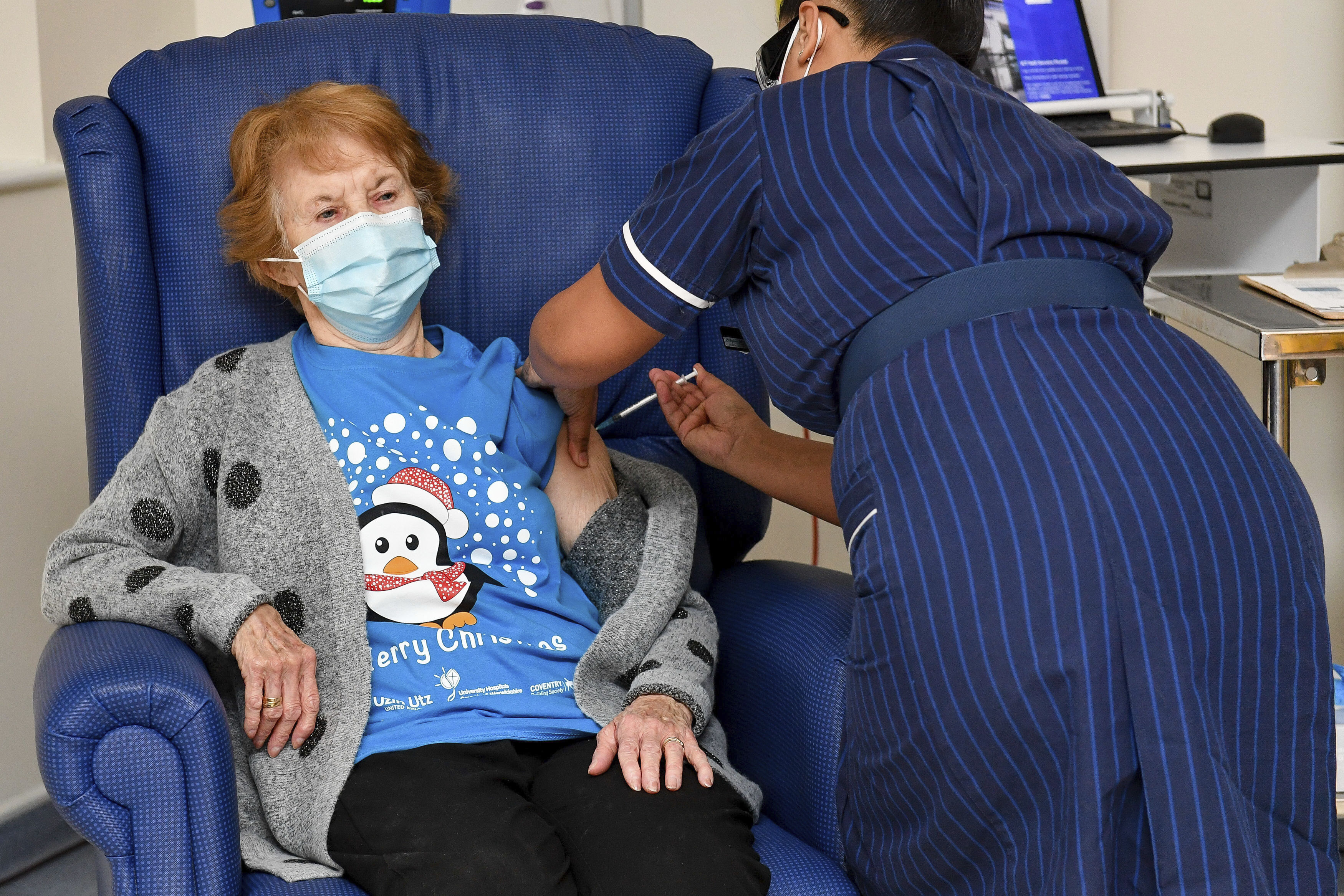 It has been a while and a lot has happened since the historic day. 90-year- old Margaret Keenan, was the first patient in the UK to receive the Pfizer-BioNTech COVID-19 vaccine, administered by nurse May Parsons at University Hospital, Coventry, England, on Dec. 8, 2020./ AP

The first shot was given to COVID-19 vaccine Margaret Keenan, who turns 91 next week, at University Hospital Coventry, one of several hospitals around the country that are handling the initial phase of the program on what has been dubbed “V-Day.”

“I feel so privileged to be the first person vaccinated against COVID-19,” said the former jewelry shop assistant, who wore a surgical mask and a blue Merry Christmas T-shirt decorated with a cartoon penguin wearing a Santa hat and red scarf. “It’s the best early birthday present I could wish for because it means I can finally look forward to spending time with my family and friends in the New Year after being on my own for most of the year.”

The first 800,000 doses are going to people over 80 who are either hospitalized or already have outpatient appointments scheduled, along with nursing home workers. Others will have to wait their turn.

Public health officials have asked the public to be patient because only those who are most at risk from the virus will be vaccinated in the early stages. Medical staff will contact people to arrange appointments, and most will have to wait until next year before there is enough vaccine to expand the program.

Stephen Powis, the national medical director of England’s National Health Service, said the first shot of this vaccine outside of a trial was an emotional moment.

“This really feels like the beginning of the end,” Powis said. “It’s been really dreadful year, 2020 — all those things that we are so used to, meeting friends and family, going to the cinema, have been disrupted. We can get those back. Not tomorrow. Not next week. Not next month. But in the months to come.”

Buckingham Palace refused to comment on reports that Queen Elizabeth II, 94, and her 99-year-old husband, Prince Philip, would be vaccinated as a public example of the shot’s safety.

Public health officials elsewhere are watching Britain’s rollout as they prepare for the unprecedented task of vaccinating billions of people to end a pandemic that has killed more than 1.5 million. While the U.K. has a well-developed infrastructure for delivering vaccines, it is geared to administer them to groups such as school children or pregnant women, not the whole population.

The U.K. is getting a head start on the project after British regulators on Dec. 2 gave emergency authorization to the vaccine produced by U.S. drugmaker Pfizer and Germany’s BioNTech. U.S. and European Union authorities are also reviewing the vaccine, alongside rival products developed by U.S. biotechnology company Moderna, and a collaboration between Oxford University and drugmaker AstraZeneca.

On Saturday, Russia began vaccinating thousands of doctors, teachers and others at dozens of centers in Moscow with its Sputnik V vaccine. That program is being viewed differently because Russia authorized use of the shot last summer after it was tested in only a few dozen people.

The first shipments of the Pfizer-BioNTech vaccine were delivered to a selected group of U.K. hospitals on Sunday.

At one of those facilities, Croydon University Hospital, south of London, staff members couldn’t so much as touch the vials, but they were thrilled to just have them in the building.

The vaccine can’t arrive soon enough for the U.K., which has more than 61,000 COVID-19-related deaths — more than any other country has reported in Europe. The U.K. has more than 1.7 million cases.

The 800,000 doses are only a fraction of what is needed. The government is targeting more than 25 million people, or about 40% of the population, in the first phase of its vaccination program, which gives first priority to those who are highest risk from the disease.

After those over 80 and nursing home workers, the program will be expanded as the supply increases, with the vaccine offered roughly on the basis of age groups, starting with the oldest people.

In England, the vaccine will be delivered at 50 hospital hubs in the first wave of the program, with more hospitals expected to offer it as the rollout ramps up. Northern Ireland, Scotland and Wales are making their own plans under the U.K.’s system of devolved administration.

Logistical issues are slowing the distribution of the Pfizer vaccine because it has to be stored at minus-70 degrees Celsius (minus-94 degrees Fahrenheit).

The immunization program will be a “marathon not a sprint,” said professor Stephen Powis, medical director for NHS England.

Authorities also are focusing on large-scale distribution points because each package of vaccine contains 975 doses and they don’t want any to be wasted.

The U.K. has agreed to buy millions of doses from seven different producers. Governments around the world are making agreements with multiple developers to ensure they lock in delivery of the products that are ultimately approved for widespread use. 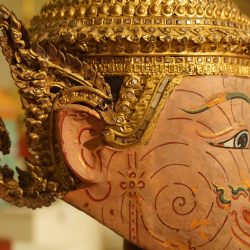 The making of history 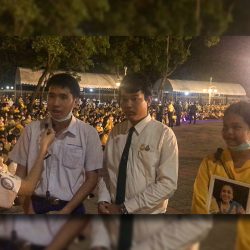