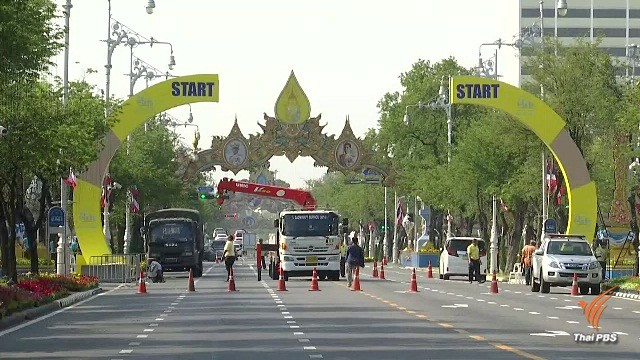 Altogether 25 roads in Bangkok will be closed as of noon on Sunday until 8 pm to facilitate the biggest cycling event of the year, the Bike UnAiRak 2018, to be led by His Majesty King Maha Vajiralongkorn, HRH Princess Bajrakitiyabha and HRH Princess Sirivanavari.

In Bangkok, the cyclists will take a 39-km bike ride from the Royal Plaza to the Lat Pho health park in Phra Pradaeng district of Samut Prakan province.

Cyclists can bring their bicycles on board the BTS skytrain and subway whereas nine parking lots around the Royal Plaza and 76 other parking space are being made available to accommodate up to 20,000 cars for motorists who have already registered to take part in the bike ride.

The Bangkok Mass Transit Authority, the city’s bus operator, has arranged for 139 buses on 15 bus routes to provide free bus service for those who want to join the bicycle ride.

Boat service between Tha Chang and Tha Wang landings has been arranged by the Marine Department in cooperation with Chao Phraya Express Boat Company from 6 am until 9 pm for bikers.

The 39-km bike route will enable participating cyclists to observe several canals along the route, particularly Klong Lat Pho which was excavated as a shortcut to bypass the Chao Phraya river.  Over the years, however, the klong became shallow and caused flooding in adjacent areas.  The late King Bhumibol initiated a floodgate project at the canal to help ease flooding in Bangkok and its vicinity by draining water into the sea.

Besides Bangkok, similar bicycle ride event is to be held simultaneously throughout the country with governors in each respective province leading the ride.

More than 500,000 bicyclists nationwide have signed up to join the UnAiRak bicycle ride event on Sunday.  All have been distributed with T-shirts designed by the King.