New COVID-19 infections in Thailand have fallen for the third consecutive day, from Thursday’s 54 to yesterday’s 50 and 45 today, with many cases related to people returning from abroad, who are now quarantined at state facilities.

CCSA spokesman Dr. Taweesin Visanuyothin said that, of the new cases, some are among those in quarantine, but they had been deemed healthy before boarding flights. Upon their arrival in quarantine, they were retested and showed positive for COVID-19.

Total accumulated COVID-19 cases in the country to date stand at 2,518, with two additional fatalities, both elderly Thai men. One had diabetes and contracted the disease from a family member. He was admitted to hospital on April 1st. The second worked as a cleaner in Bangkok, but had returned to his hometown in Phayao province on March 19th. He was admitted to hospital a few days later because his condition had deteriorated.

Dr. Taweesin denied that the CCSA conceals the true number of infections and fatalities by hiding them among the influenza statistics. He noted that flu cases this year have reduced because face masks are being worn constantly.

Meanwhile, the Ministry of Interior reported today that 47 provinces, in addition to Bangkok, have banned liquor sales, for different periods, from today until April 15th, or up to the end of the month, at the discretion of each provincial governor. 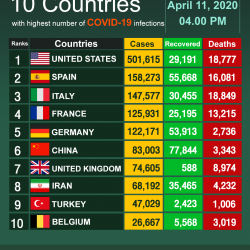